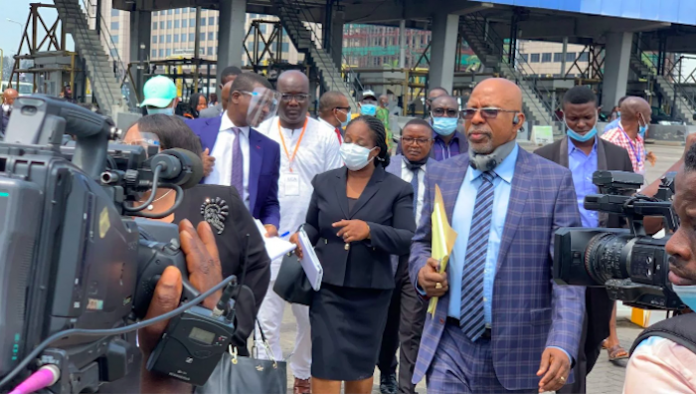 The Lagos Judicial Committee set up by the Lagos State Government to investigate the Lekki Shooting on Friday paid a visit to the Military Hospital at Ikoyi to inspect the morgue.

The panel, led by Dorris Okuwobi, a retired judge, disclosed the unscheduled visit to the morgue at the military hospital after Friday’s sitting.

The inspection is to help the panel with evidence that could assist their investigation.

Ebun Adegboruwa, a Senior Advocate of Nigeria who is a member of the panel, said the visit was borne out of ‘intelligence report’ the panel received.

“We decided to pay an unscheduled visit to the mortuary of the military hospital because we have confidential information concerning certain events that took place in the hospital here.

“We are waiting for them to grant us access to inspect the mortuary because we have reasons to believe that that facility is relevant to our investigation.

“We don’t want to make any conclusions yet until we have access to the mortuary to inspect it. We have a pathologist with us, who is here to help us conduct medical examination of bodies that we may find in the mortuary,” Mr Adegboruwa said.

The panel, which met with resistance from the military officials, declared that they had the backing of the state governor and President Muhammadu Buhari also gave them the authority to conduct the investigation.

The military hospital is controlled by the 65 Battalion, a unit of the Nigerian Army alleged to have sent soldiers to Lekki toll gate on October 20. The soldiers are believed to have shot at unarmed protesters.

Initial reports indicate that two persons died in the Lekki shooting while others were injured.

There were allegations that military personnel carted away the bodies of many victims of the shooting to cover their tracks.

Authorities of the Nigerian Army, however, denied all the allegations stating that ”they were invited by the Lagos government to intervene but did not open fire on protesters”.

Meanwhile, after several minutes of waiting at the gate of the military hospital, the military allowed the panel members accompanied by journalists into the premises.

Upon gaining access, it was discovered that all the facilities were not functioning, including the morgue, as the military hospital is undergoing renovation.

The team was welcomed into empty hospital rooms, with planks and other renovation materials littering the floor of the hospital.

Colonel Ogoh and A. I Taiwo, the military personnel who led the team on the tour around the hospital, said it has been on renovation since October 2019.

The soldiers declined to answer questions on where bodies that were at the morgue before the renovation were transferred.

“No interviews please,” the officer replied.

The panel earlier visited the scene of the Lekki shooting where six bullet shells were recovered.

The management of the Lekki Concession Company was present before the panel to present the CCTV footage of the Lekki shooting.

The panel did not admit the evidence on Friday. The matter adjourned to Tuesday to enable LCC to appear before the panel with a legal counsel.

NBA Election and Its Fallout