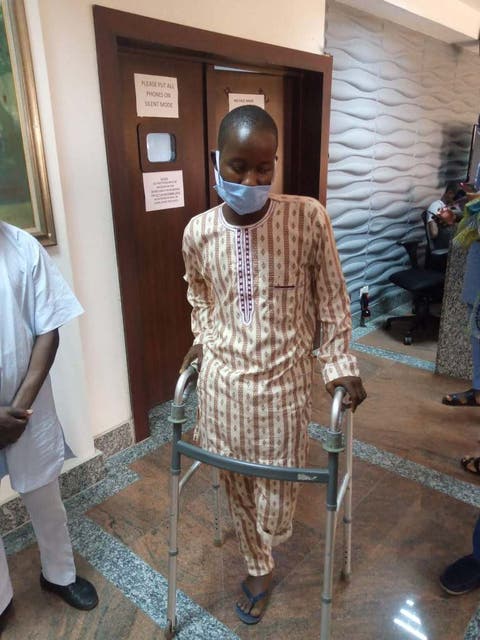 A 27-year-old carpenter and an #ENDSARS protester, Lucky Philemon, who was shot at on October 20, at the Lekki Tollgate, appeared before the Lagos State Panel of Judicial Inquiry, on Saturday, with his left leg amputated.

The amputee’s lawyer, O. E. Bamgbola, told the panel that the petitioner, a peaceful protester, was before the panel in relation to the Lekki shootings.

He said: “The petition relates to a peaceful protester who suffered gunshot injuries as a result of the shootings of October 20 in the Lekki axis, in consequence of which he became an amputee; his left leg was amputated.

“The petitioner is ready to commence his evidence, subject to the convenience of the panel.”

In her response, the panel chairman said that Philemon could not commence his evidence because his case was only listed for mention on the panel’s cause list.

Justice Okuwobi also noted that the panel needed to issue a summons on the Nigerian Army since the complaint was against them, and then adjourned till January 8, to enable the victim to give evidence.

In an interview, one of the lawyers representing the victim of the Lekki Tollgate shootings, Chiedu Nwocha, said that the incident happened around 7p.m., when the military was advancing on the protesters.

He said, ” According to the report he gave, he said they were advised to sit on the floor, wave the flags that they have with them, and sing the national anthem, but that suddenly the military men began to shoot.

“As the gunfire intensified, he decided that it was time for him to leave, then immediately he stood up, that was the last thing he remembered.”

Chiedu said that the amputee, who is a carpenter from Kaduna State, was directly shot at by soldiers at the Lekki Tollgate on October 20.

“Some hours later when he regained consciousness he saw himself in the midst of other badly injured protesters. He said he spoke in Hausa in a manner suggesting that this one is still alive.

“So the soldiers put him in an ambulance and took him to Reddington Hospital and eventually his left leg was amputated.

“At the point of discharge, he was told that the Lagos State government had paid his bill, and that’s when they gave him crutches.

“He was in the hospital from October 20 to November 23, almost a month and two days,” the lawyer stated.

He further stated that the relief they are asking for is for the government to do what they need to do, as it was already a sad situation.

“Government should ameliorate his suffering. He needs a prosthetic leg to move around. He is a professional carpenter from Kaduna State. He is 27 years old and has his life ahead of him,” he added.

Meanwhile, the Nigerian Army has repeatedly denied shooting at or killing any of the #EndSARS protesters.

But a number of persons with injuries have surfaced, insisting that they were shot at, at the tollgate and that they witnessed the death of others.