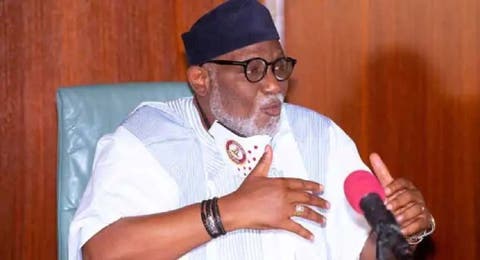 Governor, Rotimi Akeredolu of Ondo state weekend said that those arrested in connection with the destruction of properties in the state under the guise of #EndSARS protest will face the wrath of the law.

Akeredolu who spoke in Akure lamented that the loss of lives, as well as the mindless destruction of public and private properties in Akure, Ondo, Ore, and Okitipupa, cannot receive accolades under any guise.

He said such actions were totally reprehensible, condemnable, and hugely misdirected, noting that he was convinced beyond any reasonable doubt that there was more to it than meets the eye.

“We will set up a committee to assess those damages and come up with what to be paid. Individuals whose properties were destroyed will be adequately compensated by the state.

“Based on preliminary reports, I undertook a tour of affected areas and assets alongside security chiefs for an on the spot assessment.

“I have seen with my eyes, the painful destruction of public assets such as the High Court Complex, Local Government Secretariat including school shuttle buses all in Okitipupa, several Police Stations, vehicles, offices, banks, markets as well as assets of private individuals.

“Of note is the Okitipupa Correctional Centre where inmates, including convicted ones, have been released.

Governor Akeredolu described the destruction spree embarked upon by the hoodlums as worrisome and deeply disheartening.

“The burning of my Campaign Office, as well as the APC and PDP Secretariats, is another dubious dimension which gives credence to our fears that the genuine motive of the original protesters had been hijacked.

He said that “what we have witnessed in the country is the reflection of deep-rooted anger harboured by not properly engaged youths.

“It has laid bare, the shortcoming of leadership which no one can claim innocence. Clearly too, no single individual, including our very vibrant youths, is insulated from the problem.

“In the same vein, the blame cannot be restricted to a period of time. We are all guilty, collectively of this accumulated burden.

On the reopening of schools in the state, the governor said ” having assessed the situation in the last few days, Schools must remain closed for the time being.

“Already, our children are billed to return to school after the disruption occasioned by the COVID-19 pandemic surge are back home.

According to him “Having assessed the situation in the last few days, we are convinced beyond a reasonable doubt that our children must still remain at home for the time being.”

Why I am studying to Become a Lawyer – Fabusiwa Omotayo...