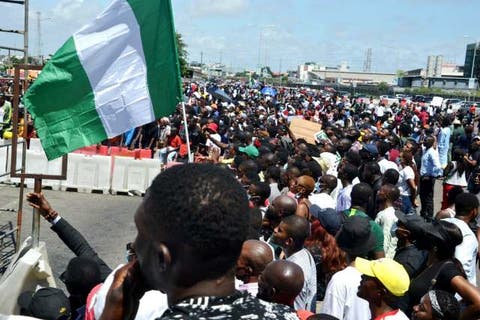 Following warnings by Lagos State Police Command against violent gatherings across the state, there appeared to be total compliance on Monday, as EndSARS Protesters were conspicuously absent at the various proposed venues in the state just as the Police have debunked a viral video about protest gatherings in the state.

As at 8am, fully armed policemen and soldiers have been deployed to some of the venues especially Lekki Toll Plaza which where the grand finale of the EndSARS Protests took place in September.

However, the social media was a washed on Monday that some youths has stormed the streets of Lagos State to protest the immediate release of all detained protesters and defreezing of their bank accounts by the Central Bank of Nigeria.

To buttress this, series of photographs and video clips were posted to various social media platforms to deceive many.

This fake information further heightened tension and apprehension in some quarters as many stayed away from major roads to avoid the unforseen.

Lagos State, in an attempt to forestall another round of #EndSARS protests. had deployed security operatives to the strategic places in the state.

Checks by Vanguard revealed the presence of security operatives at some protests venues like Ikeja, Alimosho, Iyana-Ipaja and Lekki Toll Plaza while protesters stayed off the venues.

Reacting to the development, Lagos State Police Public Relations Officer SP Muyiwa Adejobi said contrary to the speculations on the social media, the Command did not give room for protest gatherings in the state.

The PPRO in a statement debunked the viral videos in the social media as regards the protests saying the Command was out to forestall law and order in the state. He said, “The attention of the Lagos State Police Command has been drawn to a viral video of a protest at Lekki Tollgate, Lagos State, purported to have been staged today 7th December, 2020″