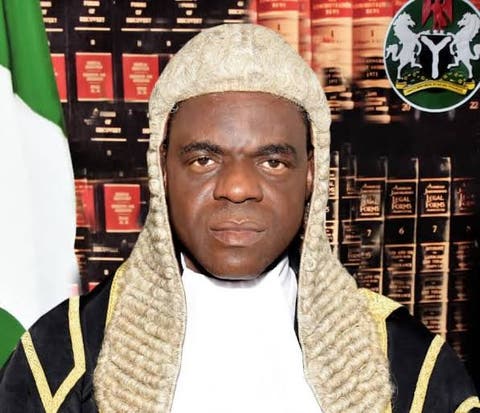 Chief Judge of the Federal High Court, Justice John Tsoho, on Tuesday, said it was not true that the court intentionally froze accounts of promoters of the recent #EndSARS protest.

Justice Tsoho stressed that contrary to media reports, the court froze accounts of some corporate entities the Central Bank of Nigeria, CBN, accused of sabotaging the country’s economy.

He spoke during a special court session the High Court held to mark the commencement of its 2020/2021 legal year.

The Nigerian Bar Association, NBA, had in a speech its National President, Mr. Olumide Akpata, presented at the event, slammed the court for freezing bank accounts of some persons that allegedly played key role during the #EndSARS protest.

The NBA President, whose speech was read by Mr. Yusuf Kadiri, said: “I must remind us of the dwindling hopes of the common man in the Judiciary.

“Following the #Endsars protests, this Honourable court was involved in the press, in a rather uncomplimentary manner on account of freezing of bank accounts of individuals and organisations believed to have bankrolled the process”.

Reacting to NBA’s statement, Justice Tsoho, said that contrary to media reports, the CBN, approached motions to freeze the bank accounts, three months before the protest.

According to the CJ: “Three months before the protest, the CBN kept bringing applications almost in their hundreds based on what they call deliberate resolve to ruin the economy through money laundering.

“So if it was the #Endsars people that were involved in the activities under cover, then it is unfortunate for people to begin to call and vilify the court, making damaging allegations against the court.

“If steps were not taken at that time, the Nigerian economy would have collapsed, that is to say about three months ago, the dollar would have exchanged far above N500”, he added.

Giving account of activities of the high court in the last legal year, Justice Tsoho, disclosed that a total of 10, 464 cases were brought by litigants in a period of 10 months spanning between September 2019 to June 2020.

The CJ further disclosed that the total number of cases disposed of during the last legal year was 8, 585 cases, adding that a total of 123, 513 cases are still pending before the court.

Meanwhile, the Body of Senior Advocates of Nigeria, BOSAN, in a statement it presented at the event, said attacks on courts by hoodlums during the #EndSARS protests, should be blamed on sluggish justice system in the country.

The body of SANs, in its speech that was presented by Chief J. K. Gadzama, SAN, said: “It is easy to dismiss this as the work of hoodlums, but it is worthwhile to consider that it signals a general and growing disenchantment with the entire justice architecture.

“The man on the street is not particularly concerned with the caseload of the judge or magistrate; all he knows is that the system is sluggish. He does but understand or appreciate the necessity of procedural rules; but he feels it very keenly when a hearing on the merits is truncated on purely technical grounds. These are only a few of this disenchantment”, BOSAN added.