An Enugu based legal practitioner Mr. Emeka Oloko has asked the High Court in the State to declare the mandatory membership of the Nigerian Bar Association (NBA) by legal practitioners in Nigeria unconstitutional.

In the suit with number OB/27/2020 filed at the Obollo-Afor Judicial Division of the Court, the Plaintiff sought various declaratory reliefs against the Incorporated Trustees of the NBA.

He argued that “NBA being a purely private association owing its existence to no law, cannot compulsorily draft legal practitioners into its membership upon call to the Nigerian Bar.”

He further sought “an order restraining the NBA from producing and/or issuing stamp and seal to legal practitioners as same is tantamount to usurping the statutory functions of the Chief Registrar of the Supreme Court who is authorised by the Legal Practitioners Act, 2004 to keep and maintain an up to date roll of all legal practitioners in Nigeria and publish same at least once every year hence staving off quacks and fake lawyers.”

Speaking on the reason why he filed the action in court, Mr. Oloko stated:

“I filed the suit because I believe the legal profession is to set the standard in upholding the rule of law in Nigeria and indeed globally. Compulsory associations are antithetical to the spirit and letters of section 40 of the 1999 Constitution of the Federal Republic of Nigeria (as amended). Every person has a right to choose whom he associates with and automatic membership of NBA upon call to the Nigerian Bar detracts from this trenchant constitutional right.”

The case is yet to be assigned to a judge. 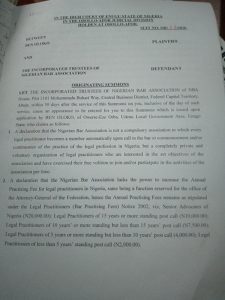 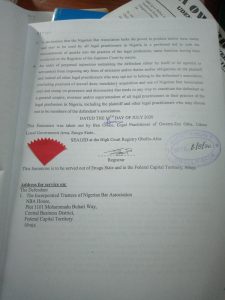