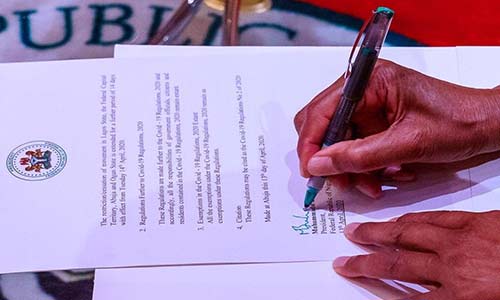 ALSO READ   Malami and The ‘Emergency Rule’ in Anambra

Part of expenditure charged upon the Consolidated Revenue Fund of the Federation relate to the Judiciary. This is seen at Section 84(4) of the Constitution which described judicial officers as including Chief Justice of Nigeria, Justices of the Supreme Court, President and Justices of the Court of Appeal etc and also Section 84(2) which orders as follows:

“The remuneration, salaries and allowances payable to the holders of the offices so mentioned shall be a charge upon the Consolidated Revenue Fund of the Federation.

For emphasis and clarity, the Constitution, at Section 84(7), stipulates as follows:

To further make it clear that the Constitution wants the Judiciary to be financially independent from the Executive and the Legislature, Sections 81(1) and 81(2) unambiguously exempted all expenditure charge upon the Consolidated Revenue Fund of the Federation from second mode of withdrawal from consolidated Revenue Fund which is by appropriation, as shown below:

81(1)  The President shall cause to be prepared and laid before each House of the National Assembly at any time in each financial year estimates of the revenues and expenditure of the Federation for the next following financial year.

81(2)  The heads of expenditure contained in the estimates (other than expenditure charged upon the Consolidated Revenue Fund of the Federation by this Constitution) shall be included in a bill to be known as the Appropriation Bill, providing for the issue from the Consolidated Revenue Fund of the sums necessary to meet that expenditure and the appropriation of those sums for the purposes specified therein.

If the judicial funds are part of expenditure charged upon the Consolidated Revenue Fund, it goes without saying that the constitution excludes judicial funds from the annual budget estimates of the Executive which is the Appropriation Bill. In ordinary words, the President is not supposed to include funds meant for recurrent expenses, remuneration, salaries and allowances of Judicial Officers in the Appropriation Bill. Such funds should be drawn directly from the Consolidated Revenue Fund of the Federation outside appropriation practice. The only fund relating to Judiciary that is subject to appropriation is the capital expenditure, because it is not provided

ALSO READ   Ikeja Branch Elections, NBA NEC Resolutions And the Concept of Non-Retroactivity: A Detached Delineation of Section 6(3) of the Uniform Bye-Law

It is clear that the framers of our Constitution wanted to make the Judiciary independent. Section 121 of the Constitution makes similar provisions which guarantees independent funding of the Judiciary at the state level.  Unfortunately, both the Federal and State Executives breach the clear constitutional provisions for the financial autonomy of the Judiciary. The breach prompted the learned Senior Advocate, Dr. Olisa Agbakoba to institute an action against the Federal Executive, represented by the Attorney General of the Federation and the National Assembly in 2013. The writer of this article represented Dr. Olisa Agbakoba in the action. Although judgment was delivered against the Federal Executive and the National Assembly on 26th May 2014, the Federal Executive has persisted in the violation of the clear constitutional provisions relating to the financial autonomy of the judiciary at the federal level.

It is amazing that the Federal Executive, whilst in disobedience to the Constitution makes the Presidential Executive Order No. 10 of 2020 purporting to provide for the Financial Autonomy of State Legislature and State Judiciary Order 2020, which has already been guaranteed by the Constitution. There is no gainsaying that loud noise about Executive Order No. 10 of 2020 is in the words of William Shakespeare, is much ado about nothing, because the Order does not provide for anything new. It is even hypocritic of the Federal Executive to seek enforcement of financial independence of Judiciary and Legislature at the State level, while impinging on the independence of the Judiciary at the Federal level. The biblical admonition (Matthew 7:1-5; Luke 6: 41-42) is apposite here:

Chinedu is a Senior Associate at Olisa Agbakoba Legal.

The Future of Employment Law in a GIG Economy – Elvis...