Home NBA News Extension of Time for Payment of BPF – To Be or Not... 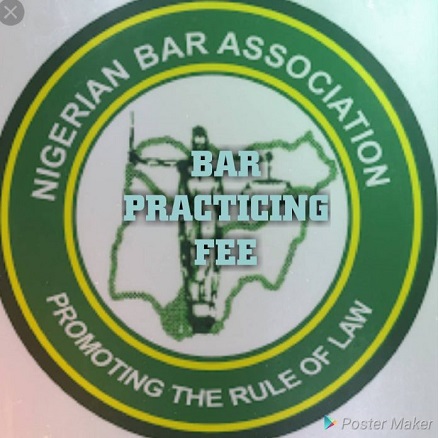 Section 9(1) of the Rules (RPC, 2007) stipulates that “a lawyer shall pay his Annual Practicing fees not later than 31st March in every year. There are many benefits attached to payment of bar practising fee within the statutory period. Qualification to vote and be voted for in both National and branch election, compliance with the requirement for various privileges in the profession, qualification for members insurance cover and many more are some of the benefits attached to paying BPF on or before 31st March of every year.

The above not withstanding, many lawyers for some individual reasons wait until the 31st day of March (last day) to pay the BPF. Unfortunately, with the coronavirus pandemic, many activities have been disrupted making it almost impossible for lawyers in this category to pay their fees before the end of the deadline. The NBA President Mr. Paul Usoro  SAN highlighted measures put in place to assist these last minute lawyers.

Despite the above measures, the debate has continued on whether or not time can be extended for payment of the BPF.

Former 2nd Vice President of NBA, Monday Ubani in a publication explained how he appealed to the President of the NBA Paul Usoro SAN on behalf of lawyers who are yet to pay their BPF and his promise to reach out to the CJN to see how lawyers can be exempted from payment of the fee for the year or extend the time within which payment can be made.

“…To be sincere I got private messages from junior and senior colleagues who asked me to request from the appropriate authorities in NBA the abolition of practising fee this year in the light of the present global health challenge that have effected the economic well being of citizens generally, lawyers inclusive. I promised to reach out to the President of NBA, Mr. Paul Usoro, SAN.

I did reach out to him through a phone call and when I broached the topic, he confided in me that some senior and junior lawyers have reached out to him on the same issue. I then intimated him the not too palatable reactions of colleagues on the 31st of March deadline in the light of the present lockdown in virtually all the States of the federation.

His response is that lawyers who have the capacity and willing to pay should be encouraged to do that but promised to reach out to the Chief Justice of Nigeria to see the need to either exempt colleagues from this year’s payment  or extend the deadline of 31st of March for the payment, as NBA alone does not have the vires to do what lawyers were demanding from him. He was surely sympathetic to the present realities and promised to do all he can to have the ears of the Chief Justice of Nigeria on this issue. Also sympathetic to the same cause was the Secretary General of NBA, Mr. Jonathan Taidi

Mr. Usoro, SAN also pointed out that the lawyers demanding for this extension should have done this during the last NEC meeting which held sometime in March this year so that a resolution would have been appropriately made on the issue for onward transmission to the Chief Justice of Nigeria and to the Privileges Committee. Nevertheless he promised to seek for the extension after the expiration of the deadline today being the 31st of March, 2020 with the belief and hope that the Chief Justice of Nigeria who is a Nigerian and aware of the happenings in the country and the entire world will give a fatherly ears  to the said request.

Mazi Afam Osigwe on his part believes that being a statutory provision, the NBA does not have power to extend the time for payment of BPF.

Do we really believe that NBA can extend the time for payment of Annual Practice Fee considering that the March 31, deadline for it was fixed by a subsidiary legislation (the Rules of Professional Conduct for Legal Practitioners, 2007).

Specifically Section 9(1) of the Rules (RPC, 2007) stipulates that “a lawyer shall pay his Annual Practicing fees not later than 31st March in every year.

Considering that the RPC was made by the General Council of the Bar in the exercise of the power granted to it by Section 12(4) of the Legal Practitioners Act and not by NBA, where then will NBA derive the power to extend the time for the payment of the Annual Practice Fee?. Since no such powers has been reserved for the NBA, it lacks powers to exercise same and any such exercise would be a bull exercise.

I say this notwithstanding the clear plight of those who may have difficulty making the payment before midnight today. Regrettably my sympathy for them cannot trump the law.

Disagreeing with Mazi Afam Osigwe’s stand, Mr. Silas Onu stated that the general assembly has the power to override the provisions of statutes and calls on the NBA President to immediately call an Extraordinary General Meeting of the Association to specifically address the issue of the need to extend the payment of BPF for those who wanted to pay.

He said: “On the contrary to the position my big brother and friend Mazi Afam Osigwe, I am of a different view on this issue. The NBA Constitution is not the supreme authority of the Association, the General Meeting is. Article 5 of the Constitution 2015 says that much.

“Therefore, the Constitution provisions are subject to override by the General Assembly, when the need arises. The Bar has various levels of decision making and the National Executive Committee under Article 7 (5.a) inspite of “h” , can make a decision and then ratify it at the next NEC meeting for onward approval in the 2020 AGM, all in retrospect due to the urgency of the time. Or, if the first option is not ok for the  EXCO, then Article 10 (4) can be deployed to call for an Extraordinary General Meeting to deliberate on this specific issue. The quorum is just 300 from 1/3 of registered branches and nothing says that such a meeting cannot be virtually done.

“I, Silas Joseph Onu, being a full financial member of the Bar and having paid my dues in January of 2020 hereby call on the NBA President, through the General Secretary, to immediately call for an Extraordinary General Meeting of the Association to specifically address the issue of the need to extend the payment of BPF for those who wanted to pay on the last day of March, being today the 31st of March, 2020 but are unable to do so due to the Emergency lockdown of the Nation.

“The meeting will consider the need to deem all payments made between now and the end of May 2020 as having been made on the 31st of March, 2020.