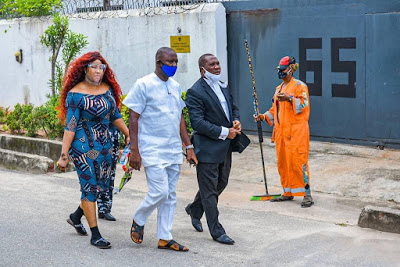 Lagos based cosmetic surgeon Dr Anuoluwapo Adepoju has been re-arraigned before a Federal High Court, sitting in Ikoyi, over allegations of a botched surgery that led to the death of a patient, one Mrs. Nneka Onwuzuligbo.

The Federal Competition and Consumer Protection Commission (FCCPC) re-arraigned Dr Anu who owns Med Contour, on Friday. She was first arraigned on 3rd of July before Justice Mohammed Liman in Lagos.

FCCPC had accused her of obstructing the investigation by its officers into the case and also disregarding several summons sent to her to appear before the agency and summons by the agency to appear and produce certain documents.

Adepoju pleaded not guilty and was granted bail on self-recognizance.

On Friday, Prosecutor Babatunde Irukera who is the Director-General of FCCPC informed the court that the commission filed an amended charge.

He prayed the court to take the plea of the defendant afresh.

The amended five-count charge was read to the defendant, and she pleaded not guilty.

The prosecutor then told the court that he was ready to open trial in the case.

He called the first witness for the prosecution Suzzy Onwuka.

The witness introduced herself as a civil servant working in the FCCPC, adding that her duty included a resolution of customers’ complaints, surveillance and enforcement activities, monitoring of sales promotion, as well as other matters referred from the headquarters.

On her experience during an investigation into the instant case, she told the court that sometime in March and April this year, the commission received complaints from people who reportedly suffered adversely from the activities of the defendants.

She said that the defendants were also reported to have made a false advertisement for their activities, adding that the FCCPC sprang into investigation of the activities of the defendants in its physical place of business, but discovered that the said address was false.

According to the witness, the commission also pasted a summons to the defendant on the same address, requesting that she should come to the commission but same was not honoured.

The prosecutor also tendered before the court a statement issued by the FCCPC on the said investigation, photographs taken, as well as a letter by the Nigerian Medial Association to the FCCPC as posted by the defendant in her Instagram account Med_Contour.

Justice Liman adjourned until October 14 for continuation of trial.