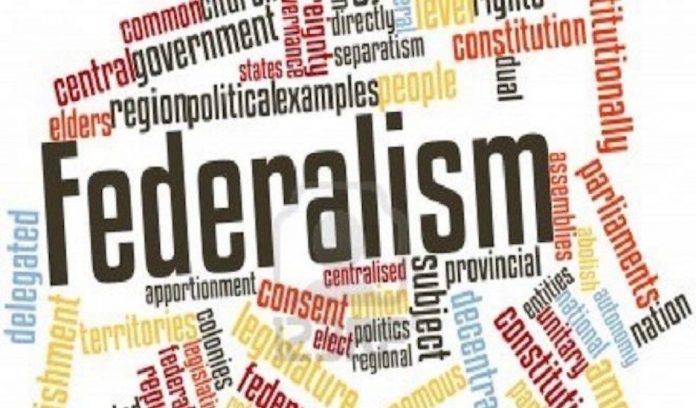 The most sensitive and contentious issues about Nigeria’s federalism seem to be the “no-go” areas. It is apparent that part of the problem with federalism in Nigeria is that, for self-serving reasons, we have refused to debate the national question and fiscal federalism. We are all so scared and feel that to talk about federalism is to suggest a breakup of the country.

The starting point is to ask: What is federalism? Federalism in my elementary understanding is the principle around which all the principalities and units constituting a nation-state have agreed to federate. There are variations in this principle, which have historical, social, economic and even military dimensions to them. This is the simple reason why there are no two similar federalisms anywhere in the world, just as there are no two similar democracies anywhere.

In the United States of America, for example, it was outright conflict between the confederates and the unionists, partly occasioned by the American civil war, that resulted in a federal solution. Hence, the debate about American independence, which was done over what is described and partly referred to as the “Federalist Papers”, resulting in the Philadelphia Congress, was meant to put in place a constitution and document that was fairly acceptable to all. Autonomous units came with their demands and needs to the debate – some wanted more autonomy and a weak centre, and others argued for a strong centre and weak units. In the end, the former won. This has worked for the United States since then.

The U.S.’s economic diversity, rather than its cultural diversity, partly accounted for this, with the South being agrarian and slave-dependent, and the North being an industrialising region that required the services of the freed slaves for its manpower. This found expression in politics. Hence Abraham Lincoln from Chicago became the leading force of the emergent industrial/capitalist class.

In Nigeria, the Richards Constitution of 1946 provided a weak framework for the federal principle, because the constitution was based on the principle of divide-and-rule, clothed in regionalism, at a time when the key nationalists and their parties were rooted in ethnic/cultural fixations. Then the National Council of Nigeria and the Cameroons (NCNC) had ceased being a federal and pan-African movement, while the Northern People’s Congress (NPC) and the Action Group (AG) had ethnic coloration in both their ideologies and membership. Various autobiographical accounts, from that of Azikiwe, to Awolowo, and to Ahmadu Bello, all bore testament to this point. Hence by 1951 when self-government was constituted in the three regions, they all saw themselves as adversarial competitors, not only in advancing the interests of their various regions but in holding power at the centre on the basis of a dominant ideology that was both culturally and ethnically defined. Chief Obafemi Awolowo took major strides in advancing social/welfare programmes in the Western Region, much more than any other regional leader. That fact is self-evident and therefore incontrovertible. This had its advantages and served as social and political leverage to the people.

The debate about a strong centre was not as attractive at that time because the politics of oil had not come into the political calculation. But a different point entirely is being made here, namely that British constitutional reforms created a mindset that made some Nigerians have regional fixations, and these fixations were conterminous with ethnic identity, hence the plethora of complaints of exclusion and oppression by minorities in all the regions that followed. Some of these were spearheaded by the Mid West, Bornu Youth Movement, United Middle Belt Congress (UMBC), Cross Rivers and Ogoja (COR) groups, etc.

All these where borne out of the British’s divide-and-rule principle. The various constitutional conferences that took place from the early 1950s onwards were meant to further divide, rather than unite Nigerians, hence the riots that took place following the NCNC mobilisation campaigns in Kano in the 1950s. Everything was politicised and Nigerians never had an opportunity to discuss their future.

If colonialism blocked the attempt of Nigerians to genuinely discuss their future, the greatest obstacle to discussing Nigeria’s federalism today is the politics of oil. This has made some analysts to talk about the principle of “resource curse”. That is, rather than serve as a blessing, oil has become an albatross on the necks of Nigerians. Oil is deceptive and misleading. In close to fifty years, oil has made it impossible for Nigeria to do anything else. The more we talk about diversifying the economy, the more we refuse to do so. The more Nigerians talk of alternative sources of revenue, the more we fall back on oil.

We need to realise that every part of Nigeria is well endowed with resources and therefore is potentially rich. We also need to realise that the greatest endowment that any region or state can have is the human endowment. Through all kinds of policies and programmes, politicians have pillaged and plundered the resources of their people. Many children and youths drop out of schools daily, while health and educational facilities are in appalling states. Today, many state governments do not collect taxes, and neither are they interested in internally generated revenue, because they believe that oil money and the Federation Account is always there for them. This mindset has made them to lose a sense of governance initiative and responsibility.

ALSO READ   Chief Security Officer of the State, The Position of the Law Amidst the Power Tussle

Nigeria’s uneven development is seen as raison d’être for the non-discussion of federalism in the country. And, the perception is that if this happens, those in the oil region would seek to “run away” with what has become the commonwealth. Resource endowments are different in all parts of the world, and others make up for their parts through the principle of taxation, manpower development, and social development policies. Once every region and state is socially developed, the urge and need to depend on any one resource would vanish.

At the core of the fear of the debate around federalism is the question of uneven social and educational development in the country. Ironically, some political elites and supremacists have used this to dominate and subordinate the interests of their people. They have indeed confused the interests of their people with their own personal interests and in the process substituted both without making any distinction, in the Mobutu/Banda style of substituting personal interests for state interests, and personal wealth for state revenue!

Nigerians must come to the self-realisation that they cannot run away from the question of federalism, because that is the direction in which all civilised nations are moving, just like the clamour for democracy and democratisation. To talk about federalism and development is to talk about making the world’s politicians accountable, redefining the basis of the social contract and covenant, and shaping a dynamic political system that will serve the public good. Federalism is not the same as ethnicity, neither is it a discussion of ethic nationality. It is simply about how federating units wish to relate to each other and what should be the defining and underlying principles that will animate such relationships and the fiscal responsibility involved.

Everywhere in the world, this is the common trend. It is no blackmail or cheap rhetoric to state that any nation that hopes to develop without addressing the issue of federalism cannot move far and attempts to muddle through will not help. Muddling through is what has made many nations to plunge into war and disaster. The campaigns for constitutional and electoral review are all symptomatic of a troubled federal system. Taken in one swoop, true fiscal federalism can help solve all these and bring about development.

There is no law anywhere in the world that says that all peoples, all states and federating units must move at the same pace of development – for social, economic, cultural and political reasons. A unit state or region may be ahead of others, but that should not pose a threat to the nation-state, rather it should be seen as a healthy development to be emulated by the other units and serve as a context for healthy competition.

Resource and human endowment vary, even financial and project priorities also vary from one state to another. Even in the U.S., all the states are not at the same levels of development. The annual budget of the Mayor of New York is bigger than the budget of the State of Arkansas or Oregon. And there is nothing wrong with this. It merely challenges the people and government of Arkansas and Oregon and their private sector players to work harder and develop at their own pace.

This brings us to the question of development? What is development? Development simply means the ability to work and meet needs, as defined and outlined by the people. The needs of the people must be at the heart of any developmental agenda. The developmental needs of the people of Jigawa State, at any point in time, are bound to be different from those of Lagos State. The level of extreme poverty in some states in Nigeria is not comparable to that in other states of the country, yet it is also known that there is a direct relationship between illiteracy and poverty. Hence to eradicate poverty in a given state, the people of that state need to be educationally empowered. Poverty has disempowered the people and as such they cannot even afford to send their children to school, and the cycle continues in a vicious manner.

In conclusion, internal challenges are what drive the federal principle; and not the principle of sharing the national cake, which many have confused as amounting to the basis of federating. That is the missing link in the debate on federalism in Nigeria. True fiscal federalism is, in essence, a democratic demand and a democratic right of citizens. When citizens talk about true federalism, they are indeed trying to pose the national question and the issue of fiscal federalism.

Kayode Oladele, a lawyer and administrator, is the current chief of staff at the Economic and Financial Crimes Commission (EFCC).