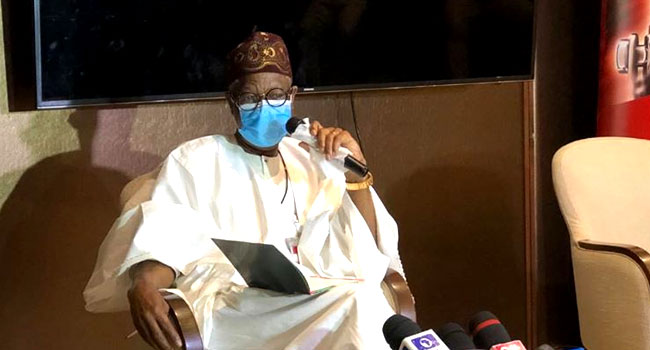 The Minister of Information and Culture, Lai Mohammed, who unveiled the document on Tuesday at an event in Lagos revealed that the government has raised the fine for hate speech from ₦500,000 to ₦5 million.

He explained that the code was reviewed in line with the directive of the President for an inquiry into the regulatory role of the NBC in the wake of the 2019 general elections.

Mohammed noted that President Buhari had also ordered the probe of the conduct of the various broadcast stations before, during and after the polls.

He stated that following the inquiry, the President approved many recommendations aimed at repositioning the NBC to better perform its regulatory role.

The minister highlighted that notable among the recommendations was the need to amend the provisions in the Broadcasting Code and Act.

He, however, decried that reactions to the last amendment were concerns who thought their business interest was superior to that of the nation.

Mohammed also raised concerns that such persons have resorted to blackmail and using what he called hack writers.

He stated that the government’s intention was the good of the country and stressed the need to catalyse the growth of the local industry and create jobs for creative Nigerian youths.

According to the minister, opportunities must be created with a belief that effective regulatory interventions are guaranteed ways of attaining such.

He said the government would not waver and asked those who still have misgivings about the amendment to the 6th Edition of the Code to meet with the regulator and present their views.

Read the full speech of the minister below:

REMARKS BY THE HON. MINISTER OF INFORMATION AND CULTURE, ALHAJI LAI MOHAMMED, AT THE UNVEILING OF THE REVIEWED BROADCASTING CODE IN LAGOS ON TUESDAY AUG. 4TH 2020

Let me formally welcome all of us to this unveiling of the new amendment to the 6th Edition of the Broadcasting Code.

This event couldn’t have come at a more expedient time after the various stakeholders in the industry have ventilated their views on this all-important document.

This is an amendment to an existing 6th edition of the Code, which was launched in Kano in July 2019.

Before the launch of the Code in Kano, there were wide stakeholder meetings and discussions on virtually all the provisions of the 5th edition, which was now reviewed as the 6th edition.

The amendments were necessitated by a Presidential directive, in the wake of the 2019 general elections, for an inquiry into the regulatory role of the National Broadcasting Commission (NBC) as well as the conduct of the various broadcast stations before, during and after the elections.

Following the inquiry, Mr President approved many recommendations that will reposition the NBC to perform its regulatory role better. Key among the recommendations is the need to amend the provisions in the Code and Act.

The amendments are mostly in the areas of political broadcasting, local content, coverage of emergencies, advertising, and anti-competitive behaviour.

Ladies and gentlemen, there are many desirable provisions in the new Broadcasting Code:

– The provisions on Exclusivity and Monopoly: This Antitrust provision will boost local content and local industry due to laws prohibiting exclusive use of rights by broadcasters who intend to create monopolies and hold the entire market to themselves.

It will encourage Open Access to premium content. I must explain that this provision is not new to Nigeria Broadcasting. Exclusivity was disallowed at a certain time in the history of our broadcasting.

– Sub-licensing and Rights sharing creates opportunities for local operators to also gain traction and raise revenue for their services.

– The law prohibiting backlog of advertising debts will definitely promote sustainability for the station owners and producers of content.

– The law on registration of Web Broadcasting grants the country the opportunity to regulate negative foreign broadcasts that can harm us as a nation. Such harms could be in the area of security, protection for minors, protection of human dignity, economic fraud, privacy etc.

– The provisions on responsibility of broadcast stations to devote airtime to national emergencies: This provision obviously mandates terrestrial and Pay TV channels to make their services available to Nigerians at times of national emergencies – like the ongoing Covid-19 pandemic – for their education and enlightenment.

– The provision raising the fine for hate speech from 500,000 Naira to 5 million Naira.

Permit me to say that section 2h of the NBC Act specifically empowers the Commission to establish and disseminate a National Broadcasting Code and set standards with regard to the content and quality of materials for broadcast.

From the above, it is clear that it is a regulatory function to establish the Code. It is democratic when the regulator engages stakeholders to get their views.

This could be done in several ways, including questionnaires, conferences, face-to-face discussions, and focused group discussions.

Once the regulator has factored all the views, he takes a decision to codify provisions that best address the needs of the country. This is what NBC has done in this case.

What I have observed in the reactions to the last amendment are interests who believe that their singular business interest is superior to the national interest. Therefore, they have resorted to all kinds of blackmail, using hack writers.

Ladies and gentlemen, we remain unperturbed, because we are acting in the national interest. The Broadcasting Code is not a static document. As we often say, broadcasting is dynamic. Therefore, even the 6th Edition of the Code shall be reviewed at the appropriate time.

But, as it currently stands, the 6th edition and the amendments, which we are unveiling today, remain the regulations for broadcasting in Nigeria.

The opportunities must be created and we believe that effective regulatory interventions are a sure way of attaining this. That’s why we will not waver.

For those who still have misgivings about the amendment to the 6th Edition of the Code, we expect you to meet with the regulator and present your views.

As I said, there are opportunities for constant review of the Code, but please note that this latest amendment is signed, sealed and delivered, and we are committed to making it work for the good of the country.

I thank you all for your kind attention.