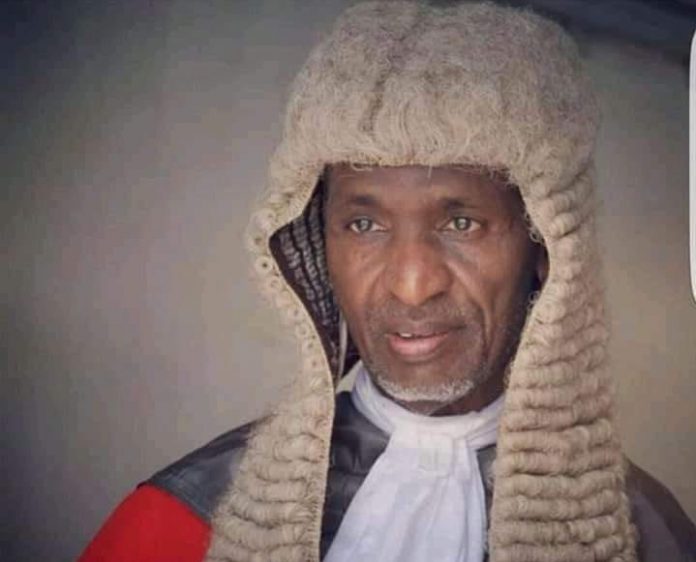 Justice Aliyu who was the second Chief Judge to govern the affairs of the statee judiciary died yesterday at around 10:00pm at the Federal Medical Center, Jalingo, the Taraba State capital.

Born on the 4th day of April, 1947 in Jalingo, the headquarters of Muri Emirate in the present day, Taraba State. Justice Adamu Aliyu studied law at the Ahmadu Bello University. He began his working career as a Clerical Assistant upon his diploma graduation and his two years of working as an Assistant Registrar saw him being posted to three different stations. He was initially at the Criminal Area Court Yola, shortly he was taken to the Civil Area Court, Yola and subsequently posted to Area Court, Gombe and in 1972, he was reposted to Upper Area Court, Yola. Upon graduation from degree program at the Ahmadu Bello University and following the creation of Gongola State, he was promoted to the rank of Higher Registrar on the 1st day of June, 1976. He left Nigerian Law School, Lagos still in the service of the Gongola State Government as a Higher Registrar till 1978 when he was appointed Magistrate II.

Justice Adamu Aliyu’s journey to the Higher Bench began on the 9th day of April, 1990 when he was appointed a High Court Judge and upon the creation of Taraba State by President Ibrahim Badamasi Babangida, on the 27th August, 1991 with its headquarters in Jalingo, Justice Adamu Aliyu became one of the pioneer Judges and following the elevation of Justice Mahmud Mohammed to the Court of Appeal, he was appointed the Acting Chief Judge on the 5th April, 1993 and later confirmed the substantive Chief Judge, a position he held for 18years before his retirement in 2012.

Justice Adamu Aliyu no doubt contributed immensely to the growth and development of the Taraba State judiciary.

During his tenure as the Chief Judge he constructed  the High Court complex in Taraba State and ensured Judges welfare is given ultimate priority.