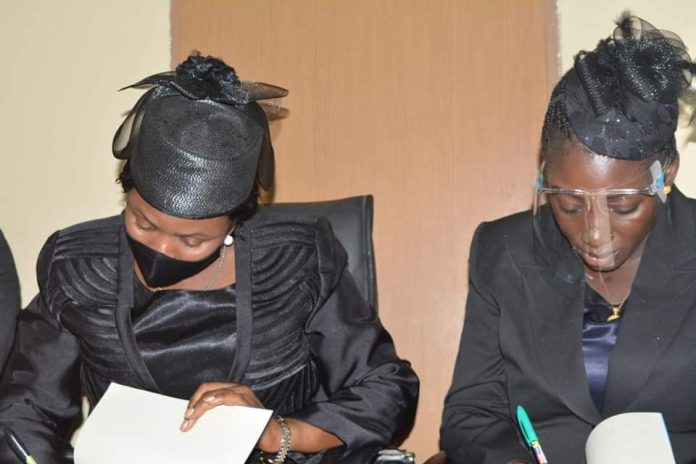 Justices Vonkat Clara Kataps and Kodiya Blessing Kazera were sworn in on the 24th of August, 2020 at the Council Chambers of the Government House, Taraba State.

The swearing in of the two female justices is seen as a welcomed development in the state judiciary which is said to have been deficient in the area of gender sensitivity in the appointment of judicial officers. The state has had only one female High Court Judge who later rose to become the Chief Judge in 2012. Upon her retirement on the 15th day of June, 2019, the bench was left with no female Judge: hence the significance of the appointment and the swearing in of two female judges.

In a statement, “Taraba Lawyers” clarified that the appointment of the female justices is not for the sake of balancing the issue of gender inequality as they are imminently qualified to take up the position.

“We must be quick to add that these women were not just appointed for the sake of balancing the issue of gender, rather these Judges earned their nominations and appointments based on their sterling credentials and experience in their respective areas of engagement. Going through their resumes, it is evidently clear that they have distinguished themselves in the legal profession and we expect them to bring their years and wealth of experience to bare in the task ahead.”

Justice Vonkat Clara Kataps was born on the 30th June, 1967 at Kaduna State but married to Honourable Gebon Timothy Kataps, the former Attorney General of the State as well as the former Secretary to the State Government. She obtained her Bachelor’s degree in Law, (LL.B) in 1990 from Ahmadu Bello University, Zaria and was called to the Bar in 1992.

Justice Kodiya Blessing Kazera Ishaku, was born on the 5th day of October, 1980. She hails from Takum Local Government Area of Taraba State. She obtained her Bachelor’s degree in Law (LL.B) from the Ahmadu Bello University, Zaria and was called to Bar in 2006. Until her appointment as a Judge of the High Court, Justice Kodiya worked with Legal Aid Council of Nigeria  as the Assistant Chief Legal Aid Officer.