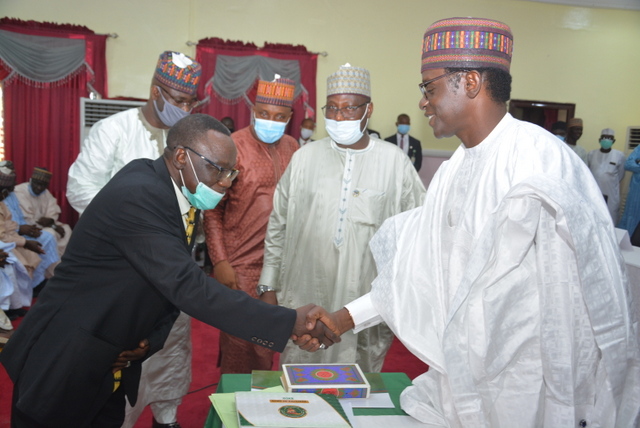 The governor, who spoke at the occasion, told the new official, Gumna Kaigama, at the Government House Damaturu that “everyone is deeply concerned about upsurge in crimes such as rape and kidnapping and other legal challenges in the country at present.”

Mr Buni said, “I am of the opinion that this unfortunate development should receive the urgent attention of the acting chief judge and the entire judiciary as they relate to doing justice, without fear or favour, to the culprits and victims of such crimes.

“The fundamental human rights of all citizens regardless of their social status should be equally protected. Nigerians, wherever they live, should feel free to express themselves without causing infringement on the honour and dignity of any person and be allowed to pursue their legitimate goals in the country.”

Mr Kaigama was appointed following the demise of the former judge, Garba Nabaruma, who died from a protracted renal illness on May 19.

He said he was appointed on merit and in line with the powers vested on him by section 174 subsection (2) of the 1999 Constitution of the Federal Republic of Nigeria as amended.

“The new judge is noted for his impartiality, hard work, simplicity, selflessness and fearlessness among other personal traits in the discharge of his duties. I am therefore, confident in his ability to discharge his duties effectively in our collective quest for quick dispensation of justice and a harmonious working relationship between the Executive, Legislative and Judicial arms of Government in Yobe State,” Mr Buni said.

Mr Kaigama obtained his Bachelor of Law degree from University of Maiduguri in 1987 and was appointed Chief Magistrate Grade 1 in 1995.

He became the Chief Registrar in Sharia Court of Appeal in 1996. He also served as a judge in Damaturu High Court.