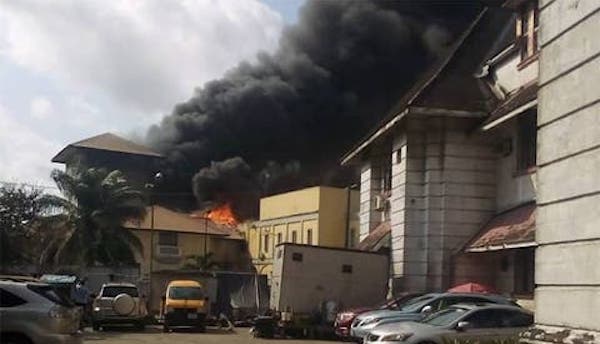 Hoodlums made their way into the Igbosere High Court, Lagos Island on Wednesday, carting away computers, printers, files, fans, air conditioners and other items.

A viral video also shows one of the thugs dressed in a judge’s robe and wig, wielding a machete.

After looting the ‘temple of justice’ the rioters set it on fire before fleeing.

These mob attacks in some parts of Lagos started after peaceful #EndSARS protesters were killed by  Nigerian military officers at Lekki Toll Gate on Tuesday evening, October 20.

In a video shared on social media, one of the hoodlums was seen dressed in a judge’s robe and wig, while holding a cutlass after the group had set the court ablaze.

Scores of irate youths have in the last eight hours taken over several public buildings in Lagos Island including the Palace of the Oba of Lagos.