A police sergeant attached to the convoy of the  Commissioner of Police in charge of ‘A’ Division Police Station in Delta state, Sgt. Galadima Nwayama has tendered a written apology for slappping an Asaba based lawyer Mr. Sammson Chinedozi Okehielem.

*FORMAL APOLOGY FROM A POLICE OFFICER*

Attached is an apology letter from a Police officer who slapped a lawyer in Asaba. The lawyer is Samson Chinedozi Okehielem, a Sapele based lawyer who had a matter before Hon. Justice F.N. Azinge at High Court No. 4 Asaba.

During the court’s sitting on the 13th day of January, 2020 a convoy of the Commissioner of Police removed the barricade on the road including the signboard ‘COURT IN SESSION’. The Court usually put the barricade because of the noise from vehicles plying that road. There are two other alternative routes within that same area but the CP’s convoy felt they were above the law.

During the commotion the Court had to rise and lawyers came out to caution the CP’s convoy that they should not remove the barricade and advised to take the alternative routes. One of the police officers, Sgt. Galadima Nwayama of the ‘A’ Division Police Station, Asaba (who was in the convoy) confronted our colleague and slapped him. Eventually the convoy passed and still returned again passing same route.

Immediately i got wind of it, i reached out to our colleague. He subsequently filed an action to enforce his fundamental rights against the said Sgt. and the Police authorities.

The Police authorities through the Command’s Legal Department reached out to me and requested for out of court settlement. Our colleague discussed with the Police legal team. He stated that he would forego reimbursenent of the legal expenses incurred. I proof read the terms and advised that the NBA President, the branch Chairman and my Lord, F.N. Azinge should be copied. 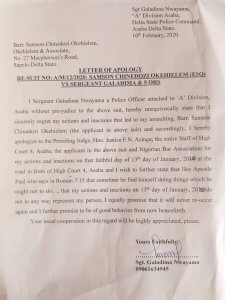 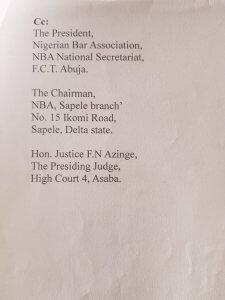 ALSO READ   My wife is a prostitute, husband tells court