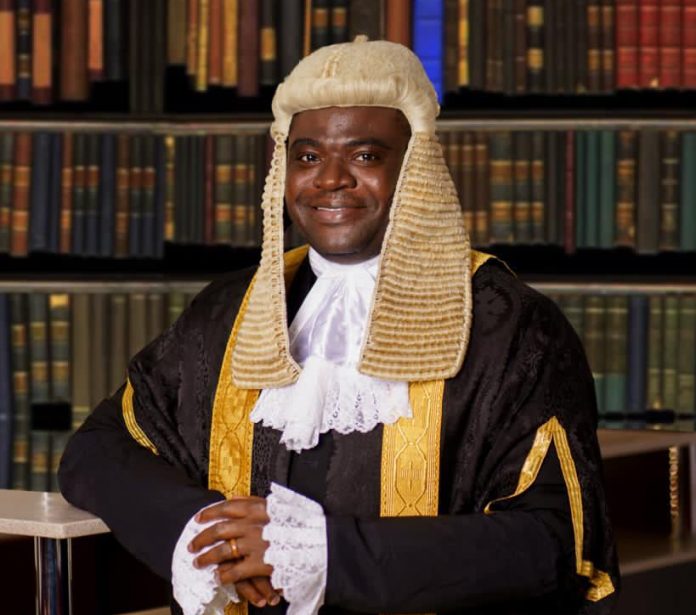 Legal luminaries from different parts of the country trouped to the ancient town of Igbajo in Boluwaduro Local Government Council Area of Osun State at the weekend to participate in a reception held for Professor Damilola Sunday Olawuyi who was recently conferred with honour of Senior Advocate of Nigeria (SAN) on December 14, 2020.

Professor Olawuyi who is also the Deputy Vice-Chancellor of Afe Babalola University Ado Ekiti (ABUAD) is the third lawyer from Igbajo to be conferred with such professional honour by the Legal Practitioners Privileges Committee. He joins two other illustrious ambassadors of the town Asiwaju Adegboyega Awomolo (SAN) and Dr Victoria Olufunmilayo Awolomo (SAN) who have attained the rank.

Victoria Parks and Garden was a beehive of activities during the reception as friends, well-wishers, relations of the honouree thronged the venue to identify with the youngest law professor in Nigeria to be conferred with the highest legal honour in Nigeria at the age of 37.

In his remark, the Osun State Governor,  Gboyega Oyetola, represented by the State Attorney-General and Commissioner for Justice,  Femi Akande, described Professor Olawuyi as an illustrious son of Igbajoland who has brought honour to his town in particular and Osun State in general.

Oyetola stated further said that the new SAN is a worthy source of inspiration to the youths to the effect that hard work and determination could earn one his life desire as it was being witnessed on the fulfilled life of Professor Olawuyi.

The governor hinted that his administration particularly, the state Ministry of Justice, would always be ready to assist the new SAN in any area he thinks such is required.

Also speaking, the state Chairman of the All Progressives Congress (APC), Prince Gboyega Famodun, who also hails from the ancient town of Igbajo, was full of accolades for the young SAN who he said has brought honour to the town of Igbajo.

Famodun enjoined youths to learn a very good lesson from the professional success story of Professor Olawuyi and lace it with prayers in order for them to have a headway in life.

The Osun APC Caretaker Chairman who congratulated the immediate family of the honouree in particular and the entire Igbajo community on this rare feat of their son prayed to God to continue to bless the community.

In his response, Professor Olawuyi stated that he has resolved to prioritise welfare of the people having attained the highest professional pinnacle in his field of study.

He expressed his gratitude to all the people who made the occasion to become a reality with a promise that he would continue to be a good ambassador of his community and his state of origin.

Professor Olawuyi, SAN who, in addition to his work in Nigeria, lectures in several universities across the world said, “The welfare of the people is the supreme law. That summarizes my world view. I hope to continue in the footsteps of Aare Afe Babalola (SAN) and other eminent lawyers in this country, who have continuously used law for its real purpose, which is to advance the welfare of the common citizen and to bring justice to their doorsteps.”

He further noted that “May God continue to make Igbajo community a veritable vessel to export more good things to Nigeria and the rest of the world,” he stated.

Some of the dignitaries in attendance were the community chiefs who represented the Owa of Igbajoland, Oba Olufemi Adeniyi Fashade; the Chairman of the occasion, Chief Adegboyega Awomolo (SAN) who is also the Asiwaju of Igbajoland; representatives of Osun State Judiciary, Justice W.O Akanbi, and Justice Adedotun Onibokun; Mrs Oludayo Olorunfemi, Member of the Nigerian Body of Benchers, Chief Adedotun Fagbenle, Prince Adekunle Famodun, representatives of Afe Babalola University, Ado-Ekiti; and the father of the celebrant, Elder Francis Olawuyi amongst others.

Register for LawPavilion Webinar on ‘Creating Your Path as a First...