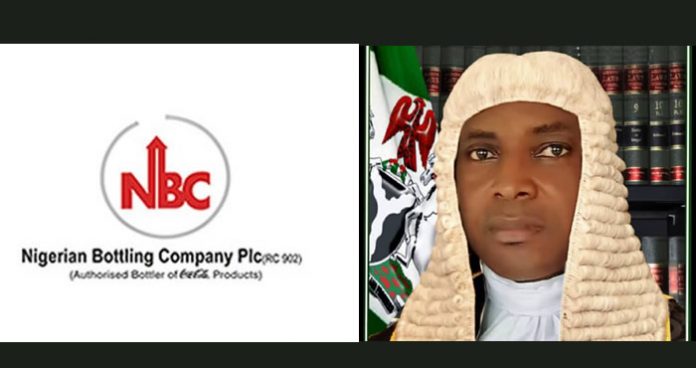 His Lordship, Hon. Justice Nelson Ogbuanya of the National Industrial Court Lagos Judicial division has ordered the Nigerian Bottling Company to take full responsibility of the medical treatment of its staff Abifarin Elijah, and ensure that his health condition does not deteriorate due to lack of adequate medical attention over his life-threatening severe spinal cord injury sustained at workplace, pending the hearing and determination of the substantive suit.

Justice Ogbuanya held that Mr. Abifarin has set out a case deserving urgent intervention by the court, warranting granting of an interim measure by way of an interlocutory mandatory injunction against the firm, ordered and directed that the enrolled order be served on any Principal Officer/Management of the Company for compliance.

From facts, the claimant- Abifarin Elijah had filed Motion on Notice averred that while on duty on May 16, 2020, he was asked to carry a heavy object that posed a health hazard to him and, in the process, he incurred an injury that affected his spinal cord and after series of tests at the hospitals, it was discovered that he had suffered an injury, requiring major medical treatment by surgery.

The claimant Learned counsel, Olusola Jegede, Esq. averred that the company informed Elijah through the hospitals that it could not continue to take care of his medical bill that he was no longer covered by the company’s medical policy, and the hospitals stopped his treatment that he resorted to personal funding of the treatment with the support of family and friends and was finding it difficult to cope, and his life was endangered urged the court to intervene urgently to save the life of the Applicant.

However, the Nigerian Bottling Company neither entered a defence nor offered an excuse for its absence, despite evidence of service of Hearing Notice.

Delivering the ruling, the presiding Judge, Hon. Justice Nelson Ogbuanya held that whether the conduct of the defendant to abandoned the Claimant to his fate in the circumstance of the incident, on the alleged ground that he is no longer covered by the Defendant Company’s medical policy remain the fulcrum of the claims in the substantive suit, which are kept in abeyance at this interlocutory stage.

“From the record,  I find that what is important at this stage, is that the life of the Claimant/Applicant is under threat due to the severe spinal cord injury he sustained while at work, and the Defendant, who has been put on notice of this application and the originating court processes, seems not to be interested on the arising issues, beyond sending the Claimant/Applicant to their hospitals and later directing discontinuance of his treatment on the alleged ground he was no longer covered by their medical policy.

“On the whole, I am satisfied that the Claimant /Applicant has set out a case deserving urgent intervention by this court, warranting granting of an interim measure by way of the interlocutory mandatory injunction against the Defendant/Respondent herein.”