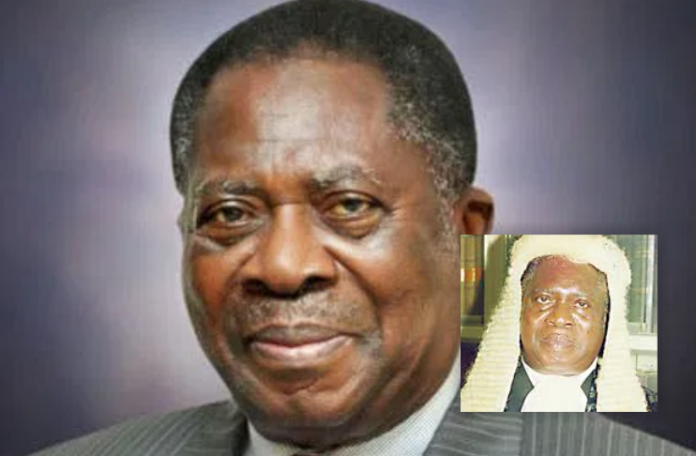 Nseobong Okon-Ekong writes on the life and times of the renowned jurist Justice Adolphus Godwin Karibi-Whyte, whose many stellar roles on national and international assignments, includes Chairman of the Nigerian Constitutional Conference of 1994-1995.

Tomorrow, Thursday, September 17, the final home journey of the eminent jurist, Hon. Justice Adolphus Godwin Karibi-Whyte who passed away on May 22 at the age of 88, begins with an evening of hymns, songs and tributes at the Church of Nativity, Pakview Estate in Ikoyi-Lagos. In keeping with health protocols of the times occasioned by the Coronavirus pandemic, the family has announced compulsory use of hand sanitizers and face masks for mourners. As much as possible, friendly embrace will be avoided. In its place will be the new manner of greeting-an elbow strike or a bump of fists.

The funeral formalities will continue in his ancestral, Abonema in Rivers State on Thursday, September 25, as distinguished relatives, friends and professional colleagues honour the memory of a man in his whose able hands the conduct of many judicial and administrative commissions and tribunals of inquiry were entrusted. In his tribute at the demise of the late Justice of the Supreme Court of Nigeria, President Muhammadu Buhari celebrated his historic role in “Nigeria’s legal system, strengthening democratic institutions and shaping the policy direction of many governments and international agencies, as he served as Chairman, Nigerian Constitutional Conference, 1994-1995, Counterfeit Currency Tribunal, Nigerian Institute of Advanced Legal Studies, Committee of Pro-Chancellors of State-Owned Universities, and Judge and Vice-President of the International Criminal Tribunal for the Former Yugoslavia at The Hague.”

Among his many stellar roles on national and international assignments, Karibi-Whyte will be remembered as Chairman of the Nigerian Constitutional Conference of 1994-1995. It must have been a very tough choice for the jurist who staked his well-earned reputation to lend his influence and legitimacy to the regime of the military dictator, Gen. Sani Abacha who was trying to transmute into a civilian president. Though notable Nigerians and civil society groups canvassed a boycott of the confab, it still attracted a good attendance and participation from persons and associations of high character, largely owing to the personality of the chairman of the conference, Justice Karibi-Whyte, who has a long and respected history of judicial activism. Unfortunately, the overwhelming extreme dislike of Abacha and everything his government represented may have affected the collective decisions of the forum because the recommendations of the Justice Adolphous Karibi-Whyte led Constitutional Conference was not implemented.

This regrettable episode in his distinguished service record does not subtract from the esteem which the bar, the bench, litigants and scholars in the entire judiciary spectrum held him. The brilliance of his pronouncements saved many appellants whose case were considered hopeless, while lawyers and law students continue to benefit from the vividness of his submissions on a variety of subjects.

His inclination to use the instrument of the law to serve the cause of the underdog may have developed from the humble beginning of his working life as a court clerk between 1951 and 1957. Serving in that capacity cultivated his admiration for the law profession and especially for judges, while firing his ambition to study law in the university. He was admitted to the University of Hull, England in 1957 at 19 years, where he obtained LL.B Degree, Upper Division in 1960. He was called to the Bar in the Middle Temple one year afterwards, and in September, 1962, obtained LL.M Degree of the University of London, and also Ph.D of University of Lagos in 1970. He joined the Rivers State Ministry of Justice as a Draftsman in 1973, and later became the Solicitor-General in Rivers State. He was also an Associate-Professor of Law at the University of Lagos. His illustrious judicial career later took him to the then Federal Revenue Court (now Federal High Court, 1976-1980); Court of Appeal (1980-1984); and the Supreme Court of Nigeria (1984-2002). Karibi-Whyte retired from the Supreme Court in 2002, having attained the mandatory constitutional retirement age of 70.

To his credit, the legal icon was the author of 13 law books and 55 academic papers. There is little wonder that very kind and profound statements are being rendered in celebration of the quintessence of this jurist. A Senior Advocate of Nigeria, Chief Mike Ozekhome noted that, “Karibi-Whyte is reputed to have delivered very powerful seminar dissenting judgements, which greatly rattled majority decisions, and formed the cornerstone of future judicial reviews and a shift by the apex court from earlier positions. The reasons behind his powerful dissenting opinions were deep, profound, luminous, resonating and courageous.”

Another senior lawyer, Mr. Ebun-Olu Adegboruwa said, “He was full of wits, wisdom and judicial stamina to tackle most cases that he participated in, either in writing the leading judgment, supporting judgment or dissenting judgment. He rendered very profound explanations behind the reasonings contained in his judgments, all of which have helped to shape the course of judicial history in Nigeria. He deployed his knowledge and experience garnered from private legal practice, up to the Bench as a judge of the then Revenue Court, now known as the Federal High Court, up to the Supreme Court, in the practical application of the determination of cases brought. His book on the practice and procedure of the Federal High Court is always a delight for judges, lawyers, law teachers and law students alike.”

A former Chairman of the Ikorodu Branch of the Nigerian Bar Association (NBA), Mr. Adedotun Adetunji described the late Justice Karibi-Whyte as an epitome of knowledge and a Professor of Law whose judgment could only be described as sound and classic. “His Lordship was a fine jurist with penetrating and lucid reasoning in his judgments. Significantly, His Lordship was courageous to dissent with majority views while he was in the Supreme Court.”

The Deputy Senate President, Senator Ovie Omo-Agege said in his condolence, “He lived a long, highly productive life but even upon his exit at 88, the retired Justice of the Supreme Court and Professor of Law, Justice Adolphus Godwin Karibi-Whyte, profoundly impacted Rivers State, Nigeria and the global community with cerebral contributions in his chosen field. It could be easier for many to remember his very significant contributions as a Justice of the Supreme Court and as Judge and Vice-President of the International Criminal Tribunal for the former Yugoslavia at The Hague but his noble impact pre-dated those assignments. Mr. Dele Adesina (SAN), a former Secretary General of the NBA accords some of Karibi-Whyte’s decisions as a Justice of the Supreme Court as the Loci Classici. He said, “It was in this court that he rendered most of the judgments which have not only stood the test of time, but some of which have also become locus classicus on the issues of law determined by the court. As a Justice of the Supreme Court, His Lordship contributed in no small measure, to the development of our laws, both through his majority and dissenting judgments. Even when his position appeared to be unpopular, he would nonetheless, marshal his reasoning in the most eloquent and professional manner. His judgments were always well researched, and he never failed to decide momentous issues of law, according to his belief and depth of knowledge. He would not hesitate to render dissenting judgment whenever his erudition, his research, his depth of knowledge, his conscience and his understanding of the issues of facts and law involved in the matter, dictated to him the imperative need and necessity to depart from the reasoning of his colleagues.”

Born on the 29th of January, 1932 in Abonnema, Akuku Toru Local Government Area of Rivers State, his service to the nation was rewarded with deserving national honours including the Commander of the Order of the Niger and Commander of the Federal Republic of Nigeria.