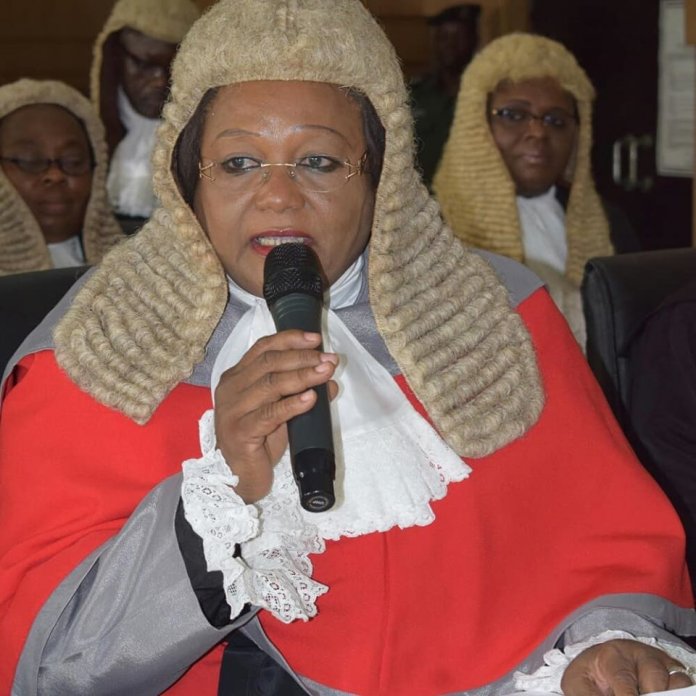 May it please your Lordships.

“She is a pleasant and fair judge. No favouritisms. You will surely get justice in her court.”

A colleague said to me in confidence:

“The lady is thorough. Her judgments can hardly be punctured on appeal. A mother par-excellence. A punctual judge, firm, accommodating, good knowledge of the law. She will listen to you and do what is appropriate as long as it is within the law. As administrative Judge, she was objective. A lady that will never encourage corruption. That is the little I can say. Then he added exclaiming:

“Ahhhh!!! She sits at 8:59am. She is already there at 9 O’clock. Highly disciplined and respectful, to the bar and everyone around her”

Another senior member of the bar who was her classmate at the University of Lagos and at the Law School said of her:

“It has been over 40 years, what can I remember of her? She is a very nice person. Very warm and serious with her work. Always very well dressed.”

Some of her former staff said:

“She is an early Judge. Her car is usually the first at the car park every morning.”

“The Judge’s disposition towards staff, lawyers etc. was palatable. Even when we are in error she corrects us with respect. Unlike some other Judges junior to her who would punish their Registrars by directing them to remain standing throughout proceedings and also shout at lawyers. She compliments her staff and appreciates their efforts. She does not take it for granted that her staff are doing the jobs they are being paid for. She is a team player. She classified everyone as a team member. She does not discriminate and is not tribalistic. She is magnanimous and gives good recommendation to her staff. She once recommended a female security guard who was as a result employed as a secretarial officer. A woman of great character. She advices her staff and cautions them on the benefits of contentment. We will miss her so much!”

“Everywhere I go when I identify myself as her staff and my colleagues all say good things about her. Calling her Mama, Mama, Mama. She is down to earth, of a truth, one of the best… She makes sure everyone is happy and at peace”

“The Registrars at the Appeal section of the High Court Registry always ask us, why are case files from her Court never being requested for Appeal? She takes her time to write her judgments and rulings. Sometimes, after delivering judgment, opposing parties would be at peace and embrace. She is humble to a fault. Carries her bag by herself. It is difficult to see a judge treating everybody like she is not a powerful person. She is humble to the point that she assigns tasks by asking politely.”

Another colleague said of my Lord, Justice Okuwobi:

“We did a case together when she was Senior State Counsel and thereafter as a Judge, I handled 3 cases before her as a Judge. From my interactions with my Lord, I can confidently say that before her elevation to the Lagos Bench my Lord was a very hardworking counsel, so hardworking to the point that her elevation was delayed (and it was rumoured this was on account of the government not being eager to release her to the Bench)…As an administrator she rose to the peak of her career in the State Ministry of Justice as Solicitor-General and Permanent Secretary. Both as counsel and administrator, my Lord is a person who desires justice to be done in all cases, and she brought this quality to bear in the discharge of her duties as a judicial officer. Having appeared before my Lord, I testify that she is always in control of her Court and the proceedings before her as she exudes warmth and respects both litigants and counsel. She dispenses justice without fear or favour and reminds you of the quintessential image of a judge.”

LPPC Calls for Application for the 2018 Conferment of SAN