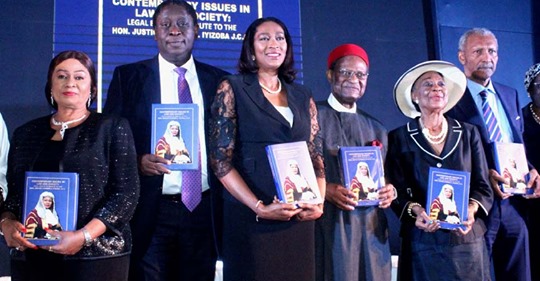 Justice Chinwe Iyizoba has called on the government to safeguard the integrity and transparency of the Judiciary through good governance and respect for the rule of law. Chinwe made the call while addressing the press during her inaugural dialogue and book launch at the Civic Center in Victoria Island, Lagos state to mark her retirement from the court of appeal.

According to her, good governance means decisions will always be transparent and in alignment with the rule of Law. She explained that only through this can accountability be entrenched. “Accountability will thus be woven into every decision and outcome.”She urged Nigerians to trust in the Judiciary despite previous happenings.

“We are hardworking and disciplined. Most of our decisions can stand the test of time but of course we are not perfect, we make mistakes” she said.She decried that very few women are in politics as a result of gender inequality prevalent in the society at large, saying it ought not be so.

Her words: “Women need to occupy political positions. They need to be in positions were they can be of immense help to the country,” she stated and urged women to show more interest in politics as they tend to be more accountable and compassionate.

“As we all know, women make better leaders. They are the ones that take care of homes so they are in the best position to render solutions.”Speaking on the newly established Africa Women’s Forum For Good Governance (AWFG), she said it’s not for profit rather it focuses on promoting the tenets of good governance in both public and private sector.

Meanwhile, a Nigerian Diplomat, Chief Emeka Anyaoku has called for restructuring of governance in order to cope with current challenges plaguing the nation.According to Anyaoku, the current structures are inefficient and incapable of facing economic, security and climate challenges amongst others.

He said: “I think this country was doing way better when it was a true federalism with four regions, and each region coped with development, security, education and health challenges as necessary facilities were put in place. We can’t get to where we want to be with these structures.”He commended the government for taking positive steps in curbing security challenges through community policing and urged state governments to take active roles in protecting lives and properties of their citizens.

The book titled “Contemporary issues in Law and Society” consists of topics on practices and procedures as well as commercial law and public law which deals with issues plaguing the judiciary and society.Nigerian Economist, Tony Elumelu represented by Onari Duke, stated that the private sector is the engine room of a country’s economy and not the government.

“The private sector creates jobs, produces innovative solutions to tackle problems that we face in society. It improves citizenry welfare and productivity, drives commerce, trade, competitiveness, and ultimately generates tax revenues which are used by the government to build and maintain critical infrastructure,” Elumelu said.