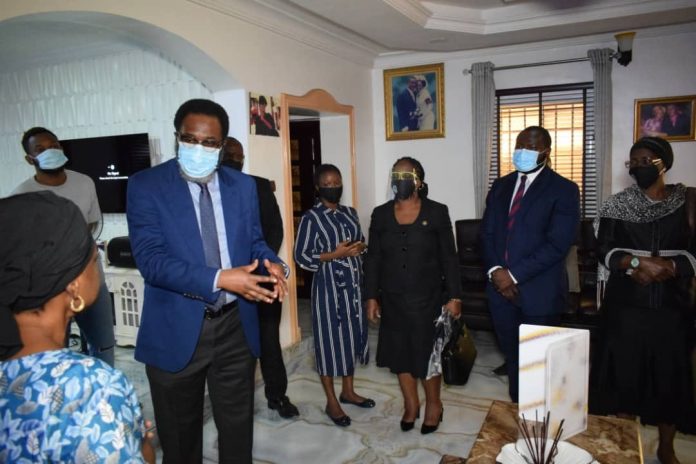 The Lagos State Attorney-General and Commissioner for Justice, Mr. Moyosore Onigbanjo (SAN), has paid condolence visits to the families of the two deceased victims, Chidinma Ajoku, 27, and Chima Nnaekpe, 29, killed by a fallen container truck at Ilasamaja bus stop along Oshodi-Apapa Expressway, assuring the victims’ families of the State Government’s support towards getting justice.

Onigbanjo, who described the incident as unfortunate and avoidable, disclosed that Governor Babajide Sanwo-Olu has directed the Commissioner of Police to commence an investigation into the incident and ensure that justice is served to bring the perpetrators to book.

While sympathising with the families, the Attorney-General revealed that the prosecution of the case will be handled personally by him in order to ensure that the death of Chidinma and her colleague Chima was not in vain.

In his words: “We deeply sympathise with you on your great loss, we pray the Almighty God grant you strength and console you at these trying times. Be assured that my team and I will be leading the prosecution of this case before the court and ensure that Justice is served appropriately “.

He expressed sympathy on behalf of Governor Babajide Sanwo-Olu to the two families, saying that “Governor Sanwo-Olu is deeply sad about the incident and we have resolved that enough is enough; we will not allow reckless drivers on the road to continue to take innocent lives in Lagos State”.

The Attorney-General also promised to brief the bereaved families at every stage of the investigation and prosecution process.

Responding, Chidinma’s mother, Mrs. Ajoku expressed gratitude to the State government for the condolence visit, saying she was overwhelmed by the good gesture.

While applauding the directive by Governor Sanwo-Olu that the incident should be investigated and offenders punished, she expressed fear for the lives of other citizens on the roads and pleaded with the Governor to enforce the laws against reckless driving.

“The killer of my daughter needs to be prosecuted to serve as a deterrent to other reckless drivers on Lagos roads”, she added.

Mr. Onyekwere Nnaekpe, the father of Chima, the other deceased victim, also appreciated Governor Sanwo-Olu’s show of concern, saying “we are moved and pleased by the concern shown by the State government”.

He, however, implored the government to hasten the formulation of stiffer penalties for reckless drivers of trucks and trailers to guard against a future occurrence of such an incident.

Recall that late Chidinma and Chima who were staffers of the Federal Airport Authority of Nigeria, FAAN, were killed when a 20ft container fell off a moving truck and landed on the commercial vehicle they boarded on July 26, 2020, on their way home from work.