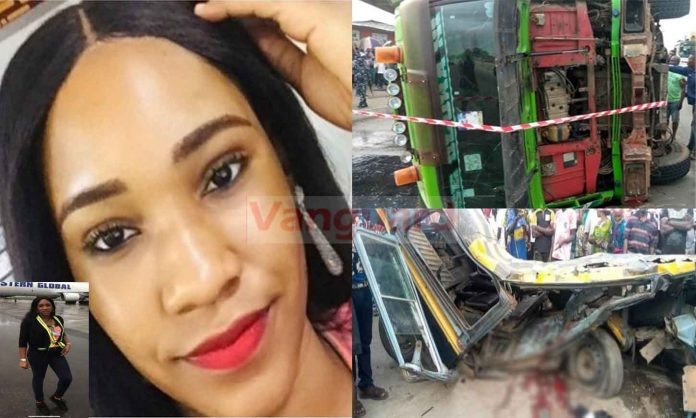 The Lagos State Government has arraigned two persons, Sadiq Okanlawon and Wasiu Lekan for the unlawful killing of 26-year-old Chidinma Ajoku, her colleague, Nnaekpe Chima and one Daniel Okwuoge.

The Attorney General of Lagos, Moyosore Onigbanjo (SAN) who personally led the prosecution of the two defendants informed Justice Mobolanle Okikiolu-Ighile that a three-count charge of involuntary manslaughter had been filed against the truck driver and the owner.

He said that the state had lined up 13 witnesses to testify against the defendants.

He asked the court to allow the counts to be read to them so they could take their plea.

In the first count, the truck driver, Sadiq Okanlawon, and the truck owner, Wasiu Lekan were charged with involuntary manslaughter contrary to Section 224 and punishable under S229 of the Criminal Laws of Lagos State 2015.

The sad incident was said to have occurred when they ran into the victims with their truck at about 4 pm on July 26, 2020, at the Ilasamaja area of the Oshodi Express Way.

After the counts were read to them in Yoruba, through an interpreter, the two defendants pleaded not guilty.

Justice Okikolu-Ighile has ordered the remand of the defendants in the custody of the police pending when the state can comply with the COVID-19 guidelines for their remand at the Correctional Centre.

She adjourned the case to the 20th and the 26th for trial.