Home Opinions Lagos Okada Ban: A Clarion Call on the Supreme Court to Give... 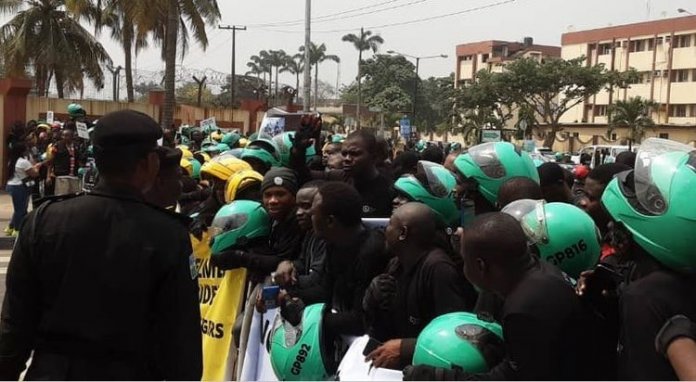 The term life as here used something more is meant that a mere animal existence. Thus, it embraces within itself not only the physical existence also the quality life.

On the 27th of January, 2020 the Lagos State Government announced the ban on Okada (Motocycles),  Keke Napep (Tricycles). The Government opined that, the reason for the ban was as a result of the scary figures of fatal accidents recorded from the opretaions of Okada and Keke Napep in the state between 2016 and 2019. The State Commissioner for information and strategy, who spoke on behalf of the government said “after a robust assessment of the debate on what has been widely referred to as Motorcycle (Okada) and Tricycle (Keke Napep) menace, the Lagos State Government and the state security council have decided that, the security and safety of lives of Lagosians are Paramount. He states that, the figures of accident are scary as between 2016 and 2019 the state recorded over 10,000 accidents reported at the general hospital alone as the numbers excludes unreported cases and those recorded by other hospitals. He also noted that the rate of crime aided by okada and napep keeps rising as the state recorded reported case of over 600 deaths from Okada and Napep accidents2.

It must be noted that, while Government policies might not favour all citizens at the same time, it is important that government in considering policies must take into cognizance the peculiar nature of the country we live in. This paper calls on the Nigerian Courts most especially the supreme court to take a critical look at the section on right to life with a view of expanding its scope to accommodate right to livelihood.

Human rights are inherently fundamental to the existence of man, as man was created, the need for him to live freely to his conscience was innate and God himself gave him the reasoning to protect himself. Man as distinct from other beings, is rational and has morals; he has power of reason to distinguish between right and wrong, between good and bad and also between justice and injustice3 as man inhuman to his fellow man will naturally irritates him has he possesses honour and dignity which is higher than that of other beings and the same must be protected.

Human rights are therefore necessary to protect the dignity and honour of man and the court is duty bound at all times to strictly enforce same without fear or favour as its seen as the last hope of the common man. Article 1 of the UNIVERSAL DECLARATION OF HUMAN RIGHTS declares that;

“All human beings are born free and equal in dignity and rights. They are endowed with reason and conscience and should act towards one another in a spirit of brotherhood”.4

There is a great need to protect these rights at all time as it readily gives the citizen a sense of belonging without thinking twice.

What Is a Right?

Rights are innate in living creatures and to that extent; it is as old as human existence.  Rights are also diverse, multi-dimensional and pervasive in nature and are dynamic, in the sense that their frontiers, constantly and ceaselessly evolved.

Right is an interest recognized and protected by the law, respect for which is duty and disregard of which is wrong.5 Rights in its ordinary sense are freewill of individual to act and be protected. It refers to cultural, social, political, economic advantages to which a person either morally, or in law can lay a just claim to or has a just claim. Rights in its strict legal sense can only mean rights recognized by law and protected by the legal system, can be considered as a right.

Rights described as ‘human’ refer to a category of rights which are protected and specified by law. Every human being is entitled to such rights and no person may be denied of such rights except through the due process of the law. Cranston therefore holds the view that:

Commenting on the nature of human rights, Eso, J.S.C. (as he then was) (late) in RANSOM KUTI v. ATTORNEY GENERAL OF THE FEDERATION6 observed inter alia that “… it is a right which stands above the ordinary laws of the land and which in fact is antecedent to the political society itself”.  It is a primary condition to a civilized existence and what has been entrenched in our grand norm.

The assertion of my lord led credence to the fact that, human right predates the existence of the society and it is a fact of antecedent to our political and economic society. It is important to state the event that happens between God and Adam when the Almighty gave him the privilege to express himself after he ate the forbidden the fruit, this goes to show that, rights predates the existence and creation of man.

In furtherance to the above provision Section 15(3)a provides that adequate facilities shall be provided to encourage free mobility of people, goods and services throughout the federation, while section 17(1)c and (3)a provides that government action shall be humane and all citizens, without discrimination on any group whatsoever have the opportunity for securing adequate means of livelihood as well as adequate opportunity to secure suitable employment.

ALSO READ   An overview of the Corporate Governance Guidelines for Insurance and Reinsurance Companies in Nigeria, 2021

Right to life isn’t just about the provisions of section 33 of the 1999 Constitution FRN as amended only, it bores down to time immemorial when issues that bothers on crime which might likely take away the life of another is brought before the kings and chiefs to adjudicate upon and also the taking of oath and consultation of the oracle to ensure that justice is properly dispensed.

Section 33 (1) of the 1999 Constitution FRN stipulates that; Every person has a right to life, and no one shall be deprived intentionally of his life, save in execution of the sentence of a court in respect of a criminal offence of which he has been found guilty in Nigeria. The Constitution further provides for the circumstances where such right shall be deemed to have been properly deprived in subsection 2 and states that a person shall not be regarded as having been deprived of his life in contravention of this section, if he dies as a result of the use, to such extent and in such circumstances as are permitted by law, of such force as is reasonably necessary – (a) for the defence of any person from unlawful violence or for the defence of property: (b) in order to effect a lawful arrest or to prevent the escape of a person lawfully detained; or (c) for the purpose of suppressing a riot, insurrection or mutiny.8

There is a need for the supreme court of Nigeria and indeed the Nigerian judiciary space to be radical in the interpretation of section 33 of the 1999 constitution FRN as amended. The supreme court of India laid a brilliant precedence when it interpreted Article 21 of the Indian Constitution which as semblance with Section 33 of the 1999 Constitution FRN. The Indian Constitution Provides that “No Person shall be deprived of his life or personal liberty except according to procedure established by law”. The term right to life under the Indian Constitution does not mean a mere animal existence rather it means to live a life with human dignity, right to livelihood, right to privacy, right to compensation etc. it ensures all freedom and advantages that would go to make life agreeable.9

Courts generally and the Supreme Court being the last court of the land must see it as a clarion call and a need to revisit the interpretation of Section 33 of the 1999 Constitution FRN as amended in a more broader way to accommodate right to livelihood. It is important to state that, there cannot be a right to life when the means of livelihood is not in place. The supreme court of India Opined that “ Right to life includes right to live with human dignity with bare necessities of life such as adequate nutrition, clothing and shelter over the head and facilities for reading, writing and expressing oneself in diverse form.10

The right of a man to have his inalienable rights respected and removed from privations under any guise is God given. The rights themselves are God given. So important that God Himself gave Adam and Eve fair hearing and trial in the Garden of Eden before sentencing them for disobedience.11

The universality and immutability of human rights are now globally accepted and any nation that shuns human rights stands the precarious risk of being shunned by decent and civilized Nations. In June, 1993, Vienna human rights, it was clearly stated that;

“Human rights and fundamental freedom are the birthright of all human beings, their protection and promotion is the first responsibility of government.”

The Nigerian constitution recognizes the sanctity of the rights and it was quick to provide protecting machinery as it provides in section 46 that “Any person who alleges that any of the provisions of this chapter (Chapter IV) has been, is being or likely to be contravened in any state in relation to him may apply to a high court in that state to seek redress. This section goes to show that the drafters not only recognizes the need to protect the rights not only when they have been violated but even in the contemplation that one’s right is about to be violated, this show the extent to which human rights are not and should not be negotiable.

Government in dishing out policies must act within the confines of the law and limits itself to the provision of the constitution in the interest of the citizens. In the words of CANDID ADEMOLA JOHNSON J, as he then was in Tony Momoh v Senate where he stated that where any arm of government: “Exceeds such powers or acts in contravention of it or in conflict with the provisions of the constitution, it would be the duty of the judiciary to put it in check at the instance of any aggrieved party.”12

Government must as a matter of fact be guided by the principles as laid down in Chapter II of the 1999 Constitution FRN as amended as fundamental objectives and directives principles of state policy and the judiciary must be alive to at all times engage in judicial activism to the benefit of the citizen while putting at the back of their mind the letters of the Constitution. The ban on Okada is coming at a time when the right to life of many Nigerians is threatened due to lack of means of livelihood. It is our hope that, my Lords temporal and spiritual will be guided accordingly.

Mubarak Tijani Esq, writes in from Abuja and can be reached via tijanimubaraklaw@gmail.com.

Finance Act 2021: Critical Changes and Implications to the Nigerian Tax...

Presidential Power-Rotation is a Constitutional Necessity, an Indispensable Governance Concept to...