Home Columns Bar and Bench Lawyer Who Makes N10k As Taxi Driver In One Day, Says He...

A Nigerian man has tasted the great profitability in the transport business after he worked as a cabman for a day .

The man, who is also a lawyer, said he was able to hit his target of N10,000 earning in a  theday. With the profit he made, the lawyer hinted that a taxi job could be more lucrative than his law profession.

The Nigerian lawyer with the Twitter handle @AlamsKabuk has revealed how he made N10,000 in a day from taxi work.

He said the profitability of the business is making him consider leaving his lawyer work to become a proper driver.

The man added that he had to use N1,000 out of the money for refreshment after the day’s work.

The lawyer revealed that he was happy he made his target for the day. Nigerians reacted massively to his tweet as people confirmed that there is indeed huge money in transportation. 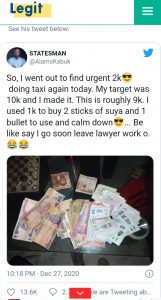