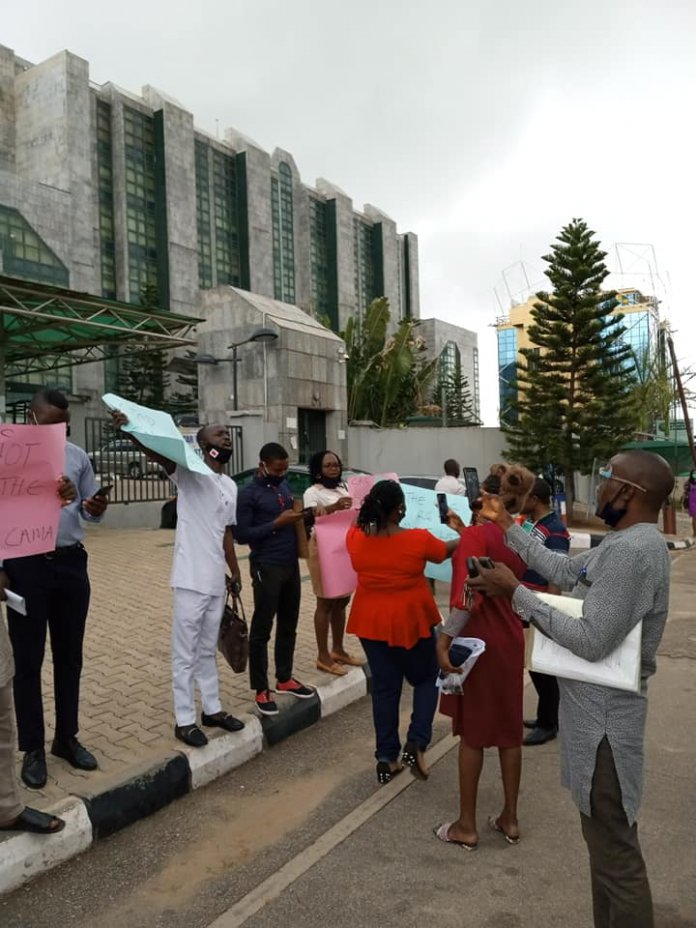 Lawyers gathered in front of the Corporate Affairs Commission (CAC) building on Tigris Crescent, Abuja to protest against the leadership of Alhaji Garba Abubakar which they described as dictatorial.

According to the lawyers, Abubakar who is the Registrar General and Chief Executive Officer of the CAC is frustrating President Muhammadu Buhari’s Ease of Doing Business reforms.

The lawyers were lamenting the treatment and introduction of manual processes which have taken the management of the CAC back to the 80s.

According to a lawyer who is a stakeholder at CAC, Abubakar is only concerned about making money and frustrating lawyers.

The lawyer lamented that since Abubakar became RG, lawyers have been treated with disdain. The lawyer said they are often kept at the car park of the CAC.

They just recently introduced a policy which states that the Consent of the Registrar General is needed to register an Incorporated Trustee. “This means he has to give consent everytime, this is a dictatorial approach and it will slow things down. Why will one man want to give consent all the time?

“For over three weeks I have been following up on a certificate that I received the RC on 27 June and I am yet to collect the certificate because of the cumbersome system put in place by the RG.

“We are kept in the CAC car park for long hours waiting for certificates that never come out. The RG is only concerned about money and seeing us suffer,” the lawyer said.

Another lawyer  explained that after concerns were raised they brought out another circular which says it was for going forward. “When I uploaded my applications they were denied and I was told to comply with the first query. The RG has no respect for lawyers. He feels he is a law unto himself.

“He doesn’t listen to suggestions and feels like he knows it all. We used to do manual searches before but because of COVID they said they will only do status reports. We did not mind because we are open to change but then he increased the search fee by N3,000.

“The problem is, they give inaccurate information and mix things up,” another lawyer said. “If you rely on information contained in the report to seal a deal, you will suffer loss.”

“I heard from a reliable source that he intends to make it permanent after COVID because of the additional N3000 charge.

A senior lawyer who was part of the protest said, “Additional cost for dispatching the documents are to be borne by the accredited user who in turn bills the customer. This is definitely going to impact the ease of doing business because the timeframe for conclusion is definitely impacted negatively.

“This above all is a decision that was brought to our notice today and enforced immediately.

“The Registrar General is unfit to head an organization like the Corporate Affairs Commission, and his actions have this repeatedly,” he said.

#LekkiMassacre: “No Justifiable Excuse for Use of Live Ammunition” – Ajibade, SAN