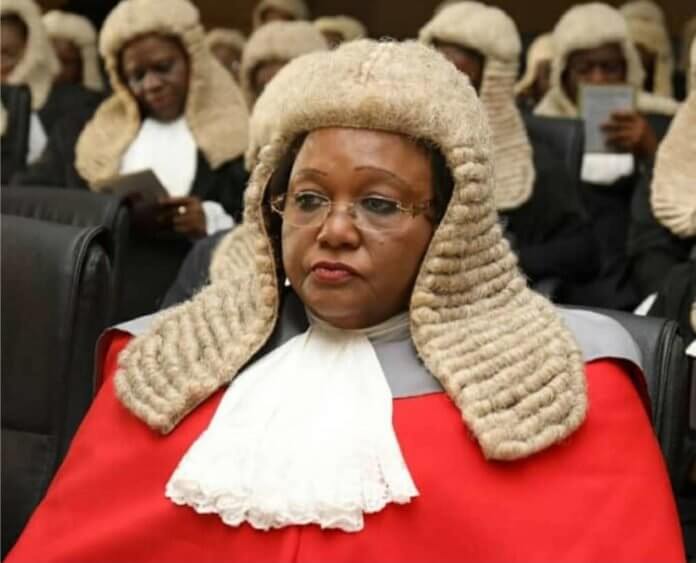 My Lord, Honourable Justice Doris Tomilayo Okuwobi was born in Lagos on the 10th of January, 1955 to Mr. Thompson Gray and Mrs. Suzanna Gray. Her Lordship began her primary Education at the Ladi-Lak Institute Yaba, Lagos, where she obtained her First School Leaving Certificate in 1966 before moving to Holy Child College, Ikoyi, Lagos in 1967 – 1971 and then proceeded to Methodist Girls High School, Yaba, Lagos where she acquired her Higher Scho-ol Certificate (HSC) in 1973. She proceeded to the University of Logos, Akoko in 1973 as the pioneer set to be admitted to study Low, where she bagged her LLB (Hons) in 1976. In 1977 she obtained her BL (Barrister at Law) Certificate from Nigerian Law School, Lagos.

Her Lordship started her professional career in private practice and worked as a Legal Practitioner with the chambers of Kehinde Sofolo & Co. in Lagos State from 1978 – 1979, before moving to the Logos State Ministry of Justice as a State Counsel. She rose through the ranks to be appointed as the Solicitor General and Permanent Secretary from 1996 – 1998.  Her Lordship was appointed a Judge of the Lagos State Judiciary on the 17th of September, 1998 and has worked in virtually all the High Court divisions in the performance of her judicial functions.

Justice Okuwobi (Mrs.) accepted to serve in various capacities during the course of her career, she served as the Legal Adviser, Board of Internal Revenue Lagos State in 1985- 1986, and she was Legal Adviser, for ·the Logos State Town Planning Appeals Committee between 1988-1992. She was a Member, Lagos State Health Insurance Scheme Committee. Between 1991 and 1993, she was the Legal Adviser1 Notional Electoral Commission, Lagos State. In 199·4, she served as 0 Member of the Maroko Resettlement committee until 1995. Between 1995-1996, My Lord served as a member, Committee on Federal Government properties in Lagos State. She was Chairperson, Committee on Private Estate development scheme in 1996-1997. She was a member of the Logos State Committee set up to examine the report of the Ayida Committee on “reforms of the Civil Service” in 1997. ·Between 1997 and 1998, she sat as a member of the “Committee to examine the report on the establishment of the proposed Lagos State College of Medicine”. In 1998, she was selected as a member of the Lagos State University visitation panel (inter-ministerial committee on the provision of Land for Lagos sewage and sanitation works) phase II. A versatile and prolific writer, My Lord delivered series of papers, and penned several articles to wit: “Pattern and Distribution of Armed Robbery in Lagos” (between 1966- 1976), “The role of a Government Lawyer in Commercial Transaction” ( Paper delivered at Orientation forum for Top Executives of Lagos State (June 1977), “Execution of Judgment, Laws, Rules and Practices” (NJI), “Workshop for Judiciaries in Nigeria’s Southern Zone”, “Workshop for Judges of the Customary Courts in Lagos State” (Paper on stay of execution of Judgments: Laws, Rules and practice, Fundamental Rights provisions under the 1999 Constitution Enforcement of these Rights by Human and Corporate persons) at the lkeja Branch NBA continuing Education Workshop 2011. “Wills”, a paper delivered at the convention of Methodist Women in Lagos. “Professional Ethics and Code of Conduct of Judges of the Lagos State Judiciary” (Paper delivered in Dubai 2015), “Judicial etiquette and comportment in the Magistracy of the Lagos State Judiciary” (Dubai 2018), “Ethics and Code of Conduct of Sheriffs of the High Court of Lagos State” (November 2018) She has also handled huge special responsibilities under the Judiciary including; being the representative of the Chief Judge on the “Integrity Committee” (2002 – 2004), Member, Public Complaints Committee (2004-2006), Probate Judge (2006 – 2008), Member, Election Petition Tribunal in Ekiti, Ogun, Bauchi and Anambra State Panels (2007 – 2009), Administrative Judge, lkeja and now that of Logos Division of the High Court, 2016, Member, High Court of Lagos State Rules Review Committee 2018-2019, Chairman, Special Committee on Probate Matters 2018.

She is a member of several notable professional bodies including the International Bar Association, Nigerian Bar Association. She was President, Christ Little Band of the Methodist Church of the Trinity, Tinubu, Lagos, and is a member of 1 the Church Council of the World Evangelism Bible Church.

Her Lordship was married to Prof. Babasola Okuwobi a Medical Practitioner. The Marriage is blessed with three Children.