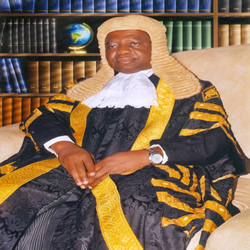 Paul Adamu Galumje started his early career as a teacher with a temporary job at the North-Eastern Ministry of Education. He was later appointed an Immigration Assistant in the Federal Ministry of Internal Affairs in 1972. He became an Assistant Registrar in the North-Eastern State Judiciary, Gongola State in 1974 and was promoted to the post of a Higher Registrar in 1977.

Hon. Justice P. A. Galumje attended and participated in International and local Workshops, Seminars and Conferences including: Magistrates Association of Nigeria Annual Conference held in Minna, Niger State from 4th – 8th November, 1985. Judicial Lectures at the Gateway Hotel, Abeokuta, Ogun State in 1991. All Nigerian Judges Conference, Port Harcourt, River State in 1993, Kano in 1995, and the editions of 2007, 2009, 2011, 2013 and 2015. International Seminar on Human Rights, Lagos in 1992. National Workshop on Judiciary and Democracy, Abuja, 1997. Commonwealth Magistrates’ and Judges Association Conference, Edinburgh, 2000. Arbitration and ADR Professional Accreditation and Membership Workshop, Dubai, 2015. Maritime Seminar for Judges, 2014, 2016. NDIC Sensitization Seminar on the Challenges to Deposit Insurance, Law and Practice in Nigeria, 2013.

Hon. Justice Galumje has presented Papers at Workshops and Seminars. Some of his Papers include:

Hon. Justice Galumje is married and blessed with eight children.