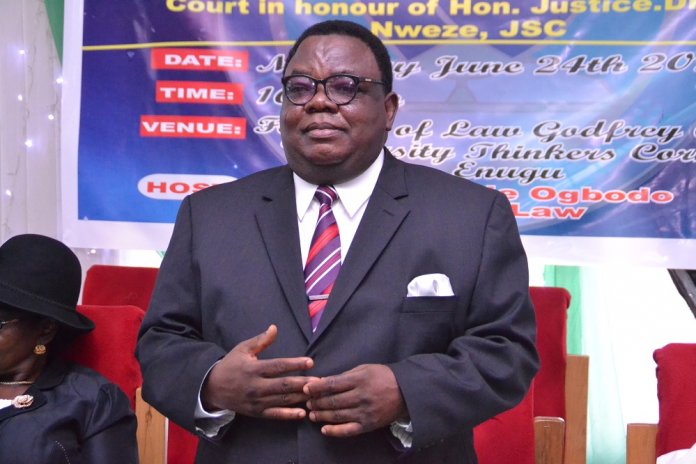 Honourable Justice Chima Centus Nweze JSC was born on September 25, 1958 in Obollo, Udenu Local Government Area of Enugu State.  He attended St John Cross Seminary, Nsukka, from 1972 -1977, emerging with a Distinction in the West African School Certificate Examination, [WASCE]. Between 1979 – 1983, he was an undergraduate student at the University of Nigeria, Enugu Campus. In 1983, he represented the Faculty of Law, and indeed, all Nigerian Law Faculties, at the Phillip Jessup International Law Moot Court Competition in Washington DC, as the Chief Oralist. Upon his graduation in 1983, [LL. B. (Hons) (Nig.)], he proceeded to the Nigeria Law School, from 1983 – 1984, where he obtained the qualifying Certificate, [BL]. He did his NYSC between 1984 – 1985 in Bauchi.

Having practised at the private Bar from 1985 – 1995, he was elevated to the High Court Bench of Enugu State in November, 1995. While on the High Court Bench, he served as Chairman, Second Robbery and Firearms Tribunal, Enugu State, 1996 -1998; Chairman, Robbery and Firearms Tribunal, Nsukka, 1998 -1999; Member, Ondo State Local Government Election Petition Tribunal, 1999; Chairman, Ogun State Governorship and Legislative Houses Election Petition Tribunal, 1999; Administrative Judge, Nsukka Judicial Division, Enugu State, 2001. He was appointed a Justice of the Court of Appeal of Nigeria, February 15, 2008; and served thereat until October, 2014, when he was, finally, elevated to Nigeria’s apex court as a Justice of the Supreme Court of Nigeria, October 29, 2014. He has been on the Bench of the Supreme Court from October, 2014 – Date.

Justice Nweze has attended several international conferences and events. He has numerous national and international publications, chapters’ contributions and articles to his credit.

Justice C.C Nweze is a practicing Catholic and is married to Justice Ugonne Jacinta Nweze of the Enugu State Judiciary. They have five children and a grandchild.