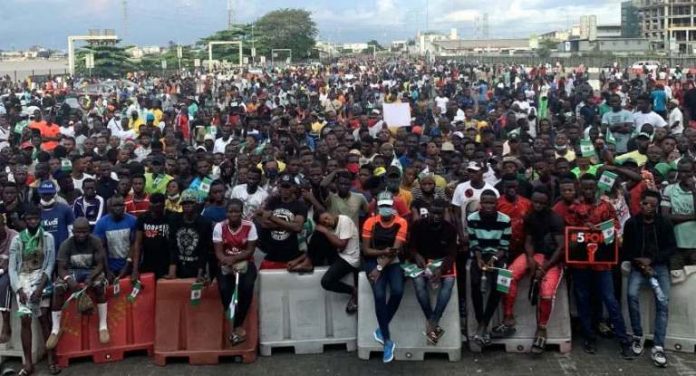 After a week’s break, the Lagos State Judicial Panel of Inquiry probing the alleged shooting of #EndSARS protesters at the Lekki tollgate by soldiers on the night of October 20 will resume sitting today (Saturday).

The retired Justice Doris Okuwobi-led panel had adjourned on November 7 when its proceedings were frustrated over inability to form quorum due to the boycott of the sitting by the two youth panel members protesting against the freezing of the bank account of #EndSARS promoters by the Federal Government through the Central Bank of Nigeria.

The Nigerian Army, which had been scheduled to testify before the panel then, was unable to do so.

The panel fixed today for the Nigerian Army to return to give its testimony.

The Nigerian Army has listed three Brigadier Generals and one Lieutenant Colonel, who will testify before the panel.

The military said it is bringing before the panel “expended blank ammunition, which was used to disperse the crowd by firing into the air on 20th day of October, 2020; unexpended 7.62mm ammunition ( a detailed explanation of the use of this ammunition will be given at the hearing); an expended live ammunition and also an unexpended live ammunition (a detailed explanation of these ammunition will be given at the hearing); 13 flash drives containing the recorded videos of the Army involvement in the incident and news report from the British Broadcasting Corporation on the incident and other stations.”

Meanwhile, victims of SARS brutality have narrated their ordeals in the hands of the personnel in some states.

They spoke during the sitting of judicial panels set up by the state governments.

Also, a victim of police brutality in Calabar narrated how the police broke into her home, arrested her and took her to Lagos in her night gown.

The victim, Scholastica Ojeka, who was a nursing mother at the time of the incident on September 4, 2014, narrated her ordeal to the Judicial Panel of Inquiry on Police Brutality and Restitution in Calabar on Friday.

The civil servant told the panel headed by retired Justice Michael Edem that she and her husband had paid a rent of N340,000 for an apartment to a landlord and moved in only for another man to show up and claim to be the landlord.

Ojeka, who testified under oath, narrated how she was arrested with her baby in her apartment in Calabar on September 4, 2014 by men of the Nigeria Police Force and taken to Alagbon in Lagos.

“We were detained in Lagos until my husband went to the Force headquarters in Abuja to lay a complaint and they were directed to let us go. In fact, one of them while apologising said I didn’t tell her that we had someone in Abuja,” she said.

She demanded the sum of N500m and an apology in a national daily as compensation.

The Chairman of the panel, Justice Michael Edem, adjourned sitting to Thursday, November 19.

Also, Mrs Ogunleye Ajayi, the wife of a late Sgt Musiliu Ajayi of the disbanded SARS, told the Ekiti State Judicial Panel on Human Rights Violations by Police Officers and other Persons that her husband’s death still remained a mystery.

The woman, a mother of four, told the panel that she had yet to know the cause of death of her husband, who left home for work hale and hearty on January 2, 2019 but was dead less than two hours after.

She said under cross-examination on Friday, “My husband, who left home on January 2nd, 2019 by 6.30am, never returned home alive. I received an emergency call from Police Hospital in Ado Ekiti by 8:30am only to get there and find out that my husband was dead.

“There were strange bruises on the dead body of my husband and the motorcycle he rode on was parked at the police station. No assistance has come to me from any person, group of persons or any organisation for the care of my children,” she said.

The woman, however, sought government assistance on the care, needs and education of her children which she said was now very difficult for her because her husband was the breadwinner of the family.

Her counsel, Samson Osobu, told the panel that three witnesses would testify on the case.

The panel requested for the investigation report from the police on the matter and then adjourned the case for continuation on November 24, 2020.

Meanwhile, the Osun State Deputy Governor, Mr. Benedict Alabi, has suggested how future protests by Nigerians could be organised to achieve results.

Alabi, who spoke in Iwo on the sidelines of an event organised by the leadership of the All Progressives Congress for the adoption of Governor Adegboyega Oyetola for another term, said a protest without a leader would be hijacked