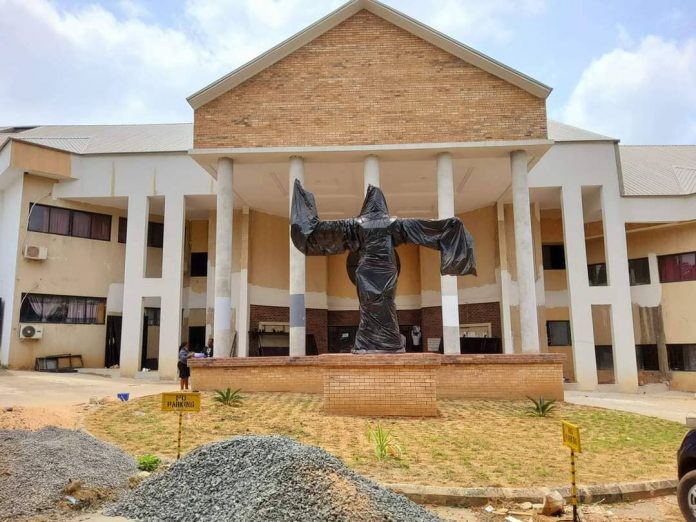 Tongues have been wagging among judicial practitioners in Enugu State since Magistrate Jude Umezulike, formerly of Enugu North Magisterial District, was suspended from the bench and his salary suspended also.

Umezulike had on December 11, 2019, delivered judgment on the case of Pastor Sabinus Onuigbo & 4 others, an official function capable of making him lose his job for ‘stepping on big toes.’

While the trial was on, Umezulike got a transfer letter to his village, Mgbidi/Ezere Magisterial District in Awgu Local Government Area of the state, in September 2019.

Despite protesting the transfer as it would expose him to sitting on matters he would likely be an interested party in (as a native of the community), he reported on his duty post until he was issued a suspension letter dated December 13, 2019, for not reporting to duty, even when he insisted that he did.

While still in his village, he was allowed by law to conclude matters he was handling at the Enugu court and the case of Christian Charismatic Mission, CCM, involving Pastor Onuigbo vs 4 others was one of them.

Umezulike finally delivered judgment on the matter but while he was reading the judgment on December 11, 2019, there was a mild drama while the court was in session. Telephone calls were coming in; some court workers urged him to pick the calls. Umezulike refused and at the end, he sentenced Onuigbo to Correctional Centre.

A day after the judgment, December 12, 2019, the Chief Registrar of Enugu State High Court wrote a petition to the Enugu State Judicial Service Commission, JSC, alleging that Umezulike refused to obey the transfer order of the Chief Judge of the state. The JSC sat on December 13 and suspended Umezulike indefinitely. His salary was also stopped.

In the suspension letter signed by the Secretary of JSC, Frank Enuma Chukwu, Umezulike was suspended for “insubordination and serious misconduct.” Interestingly, Vanguard findings indicated that Umezulike was not issued any valid query for failure to report to his new duty post, which was the reason JSC gave for his suspension and stoppage of his salary.

On December 14, before Umezulike was officially informed of his suspension, some members of Onuigbo’s church had gone on social media celebrating the Magistrate’s suspension, accusing him of disobedience in delivering the judgment “against the advice of his superiors to stay action on the case till the litigations levelled against him are determined.”

Subsequently, on January 21, 2020, the Church took an advertorial in a national newspaper to congratulate the state judiciary for slamming indefinite suspension on the Magistrate.

It was Umezulike’s letter to the Chief Judge that prompted his being officially served with a query for alleged absenteeism from duty that brought about his suspension, an action Umezulike said was like an afterthought which amounted to putting the cart before the horse.

Curiously, Umezulike received the query and a reply to his letter of clarification on the same day, February 20, 2020, two months after his suspension.

In his reply to the query on February 24, 2020, Umezulike said: “It is strange that a whole judiciary will first dish out punishment to a magistrate, then set up a panel to investigate the said magistrate, then the same panel will remind the JSC to issue query on me. Where is the justice in all these? God save Nigeria. The entire episode is a mockery of time-honoured principles of fair hearing and justice.”

Vanguard learnt that the Attorney-General of the state, Mr Miletus Eze-led panel that was supposed to investigate the allegations and apply disciplinary measures, berated the JSC for meting out punishment before issuing a query to the accused, and washed his hands off the matter. Since then, the matter has been hanging like a colossus on the neck of the Enugu State Judiciary.

In his last remark to the JSC, Umezuilke insisted that Pastor Onuigbo’s sentence was his albatross and cited pointers to his allegation.

Meanwhile, Pastor Onuigbo, who allegedly is at the centre of the entire episode, has been granted bail via a motion ex-parte presided over by Justice C.C Ani of the state High Court and a suspected relation of the convicted clergy.