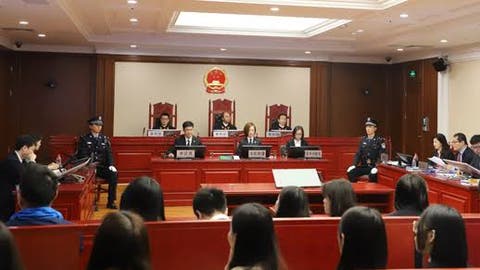 Lee Chun-jae, the suspect in one of China’s most notorious serial killings, admitted he murdered 14 women and girls three decades earlier, including a 13-year-old girl in 1988.

Lee admitted to the crime on Monday in court while attending the retrial of a man who was allegedly wrongly convicted and served 20 years in prison in the case.

He later confessed to all the cases, including one in which another man, identified by his surname asYoon, was charged and sentenced to life imprisonment in 1989.

Yoon, who was released on parole in 2009, filed for a retrial at a district court in Suwon, south of Seoul, in November last year.

Lee attended the hearing as a witness and admitted that he committed 14 murders and about 30 sexual crimes.

“I am the real criminal,’’ Lee said while wearing a blue-green prisoner’s uniform. He is serving a life sentence for raping and killing his sister-in-law in 1994.

“I sincerely apologise to Mr. Yoon, who was falsely charged with the killing l committed and served prison time,’’ Lee said.

“I wish for the eternal rest of the victims and apologise to the bereaved families and all those involved in the cases.’’

He added he is reflecting on himself and that he confessed with such a mind.

Lee said he didn’t think his crime would be buried forever, he added that he does not understand why he was not on the list of suspects at that time, claiming he did not conceal evidence.

When asked about the reason for his crime, Lee said he has not found the answer yet,describing it as an impulsive act, rather than one with any specific plan or thought.

“I don’t know exactly why I lived such a life at that time. I didn’t plan and prepare to commit the crimes, and I just acted depending on the situation,’’ he added.

Lee will not be prosecuted in the cases as the statute of limitations on them has expired.

Yoon, 53, calmly watched the hearing from the defendant’s seat.

Yoon has claimed police forced him to make a false confession at that time.

The local prosecutors office has said that its reinvestigation found that he may have been wrongfully charged.