Home News Murder Of My Wife By Police Has Demoralized My Family ― UNIBEN... 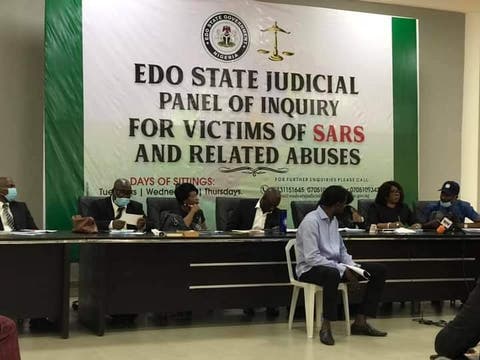 A 62-year-old lecturer of the University of Benin (UNIBEN), Dr William Okotie, gave an account of how his wife late Dr (Mrs) Stella Okotie was killed in front of the university gate by policemen which he said has destabilised his family life since the incident happened early this year.

Appearing before the Edo State Judicial Panel of Enquiry on police brutality yesterday, Okotie said the life of his late wife was cut short due to the recklessness of the men of the Nigerian police at the gate of the university.

Accompanied by his son, Ogheneochuko, Okotie told the Panel that his wife was killed while standing at the front of the school gate.

He said: “We don’t know what happened between the driver and the policemen. We only saw the officers of the police dragging the steering with the driver until they hit my wife.

“My son and I were standing alongside my wife, (now deceased)when it happened”, he said.

Okotie who is a lecturer in the Department of Public Administration of the university told the Panel also that the family has done with the burial but needed compensation from the government to be able to take care of the family and settle debt incurred during her burial.

When asked how he has been coping since he lost his wife, the university lecturer said it has been hell trying to take care of the family as he has to battle with how to cook and dress up the children for school.

He said “Since it happened, it hasn’t been easy with us. It is not something one should experience; I have been doing the cooking, school run.

“My wife was a lecturer in the institute of education. She was fond of where she worked, and she died in front of her workplace.

“This was caused by the unprofessional conduct of the police. Two police officers were dragging the steering with the driver of the minibus which led to her death”, he said amidst sobs.