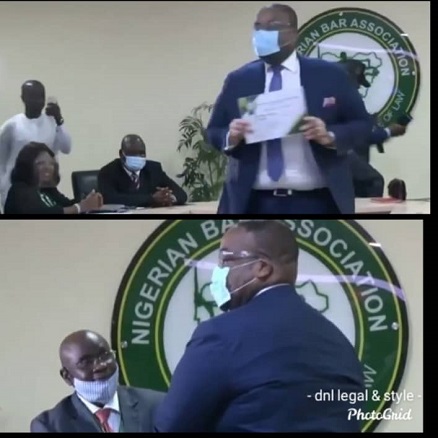 The above was earlier announced by the ECNBA in its last bulletin titled “Conclusion of Elections into the National Offices of the Nigerian Bar Association and Issuance of Certificates.

In the bulletin, the ECNBA stated:

“At exactly 11.00 PM on the 30th of July 2020, voting came to a close in the election into National Offices of the Nigerian Bar Association. The results of the election have since been announced to members of the Bar by the Chairman of the Electoral Committee as the Electoral Officer, soon after the close of voting. A detailed report on the entire electoral process shall be presented to the Bar at the National Executive Committee (NEC) meeting.”

“Certificates of Return will be issued by the ECNBA to Winners of the Election on the 2nd day of August 2020, by 3.00PM.”

The short ceremony which was held at the National Secretariat of the NBA in Abuja, was attended by only the elected officers in line with the directives of the ECNBA in its notice:

“Note that as a result of the Government restriction on number of persons at public gatherings and other COVID19 regulations in force, ONLY Recipients of the Certificates or their authorized representatives, with not more than One (1) guest each, will be accommodated at the event.”

With the above ceremony, the mantle of leadership of the Nigerian Bar Association has been handed over to the Olumide Akpata led Executive till the next two years.

Expectations are high as the bar community await the promises made by the officers during their campaigns and manifestos.

The newly elected officers who received their Certificate of Return at the event are:

We Are Committed To Unifying The NBA And Restoring Its Full...