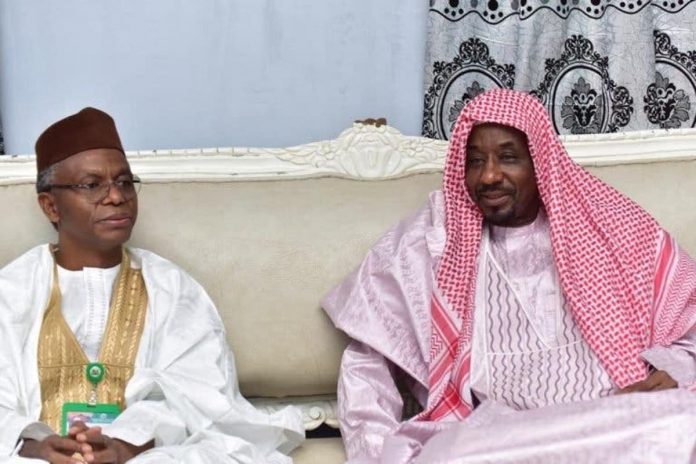 The deposed Emir of Kano, Muhammadu Sanusi, has faulted the disinvitation of Governor Nasir El-Rufai as a speaker in one of the panel sessions at the 2020 conference of the Nigerian Bar Association (NBA).

Speaking during a visit to the Kaduna State governor at his office in the Government House on Sunday, Sanusi criticised the NBA for taking such a decision by relying on mere hearsay or petition from a few lawyers.

He believes it is wrong to withdraw the invitation the association earlier extended to the governor without given him a fair hearing to defend himself.

The former emir, however, advised that the matter should be handled properly by the leadership of the NBA to prevent it from generating ethnic or religious concerns.

According to him, the association has lost an opportunity to interrogate the governor and collectively rub minds to identify areas that need to be addressed for the purpose of governance.

Sanusi also prayed for peace to return to the troubled Southern Kaduna and other parts of the country where there were security challenges.

He also commended his host for the way he has managed the affairs of Kaduna, especially the effort to resolve the security challenges in Southern Kaduna and other parts of the state.

On his part, Governor El-Rufai described the former emir as a worthy partner and friend to Kaduna State.

He noted that as the Vice Chairman of Kaduna State Investment Promotion Agency, the former traditional ruler would help in turning around the economy of the state.

Following his arrival in Kaduna, Sanusi was received by a crowd of supporters who joined in his motorcade to the Government House.

His visit to Governor El-Rufai, who is his long-time friend for over 40 years, comes more than five months after he was deposed by Governor Abdullahi Ganduje of Kano State.