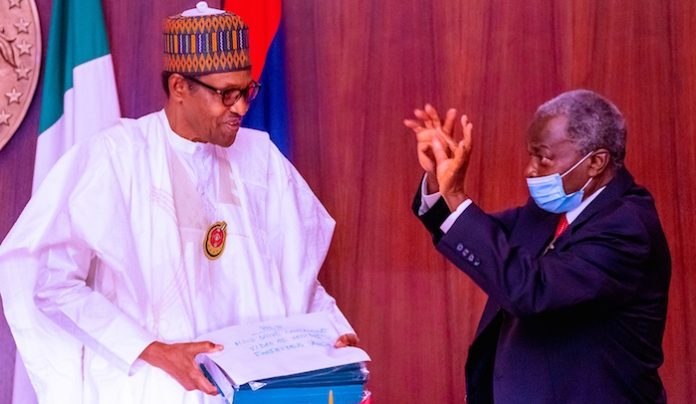 Justice Ayo Salami, the chairman of the panel set up to investigate allegations of corruption against the Acting Chairman of the Economic and Financial Crimes Commission (EFCC) Ibrahim Magu, has recommended that the next head of the anti-corruption agency should come from outside of the Police Force.

He made the recommendations on Friday, after presenting to President Muhammadu Buhari a report by the panel set up to investigate allegations of corruption by the Attorney General and Minister Justice, Abubakar Malami, linked to the Economic and Financial Crimes Commission (EFCC) and the acting chairman, Ibrahim Magu.

According to him, the four previous chairmen of the EFCC since inception were from the police, so an opportunity should be open to persons from other law enforcement or security agencies as provided in the EFCC establishment Act of 2004.

Justice Salami believes this will help the commission better reposition itself for greater effectiveness.

Read Also: I Want Nigeria To Be Counted Among Countries That Don’t Tolerate But Fight Corruption – Buhari

“Four successive chairmen of the EFCC from inception, have been drawn from the police.

“Therefore, in appointing a new chairman of the EFCC, consideration should be given to candidates from other law enforcement or security agencies and core staff of the EFCC as provided in the EFCC establishment Act of 2004,” he said.

“It is also important to point out that there are 970 policemen, 114 drivers and 641 mobile policemen and 215 operators on secondment to the EFCC.

“Therefore, an exit plan for the disengagement and other personnel within two years from now should be considered. This will address the issue of no promotion of core staff for over nine years. For over nine years, some of the core staff are stagnant in one position which is unhealthy and is creating some sort of rivalry between the police and the core staff of the EFCC. Your excellency, our thinking here is that whoever you are appointing, other than a core EFCC staff should be in transitional capacity of two years, during which period arrangement can be made for appointment of the core EFCC staff who had proven themselves commendable”.

President Muhammadu Buhari had inaugurated the panel in July and it was given 45 days to carry out the assignment but the time frame was extended further after the panel requested for more time.

Biafra Civil War and the Doctrine of Implied Constitutional Mandate: An...