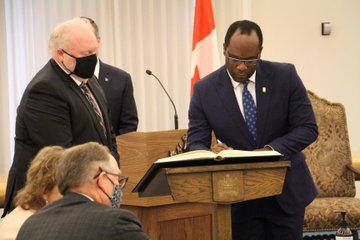 Kaycee Madu, a Nigerian-born lawyer, has been named the minister of justice and solicitor-general of Alberta, Canada. But it is not just any other appointment. 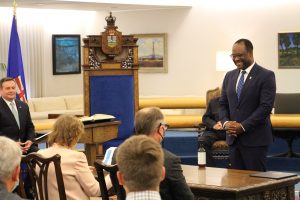 With his elevation from his previous role as minister for municipal affairs, Madu is the first African to be appointed minister of justice — a “strong statement,” according to Jason Kenney, premier of Alberta. His appointment has been described as one that would bring the “needed perspective” and change in the justice system.

In the words of Kenney, “at a time when we are all more sensitive to the reality of racial prejudice, I think it is a strong statement that Alberta will have its first justice minister of African origin; first Black Canadian justice minister, attorney-general or solicitor-general.

“He is a man who has experienced racial prejudice first hand, and can bring that sensitivity to this important role.”

Since he left Nigeria 15 years ago, Madu has served in different capacities. He has worked for Legal Aid Alberta, and volunteered with the Edmonton Community Legal Centre and the Lawyer Referral Program of the Law Society of Alberta.

The lawyer had his tertiary education at the University of Lagos where he studied law before he was called to bar in the early 2000s.

In 2005, he and his wife — who also studied law — migrated to Canada where they have been practising.

Tisel Law Office, their law firm, was established to “provide high quality client-focused legal services as we place the client first, and will work with you to find the best solution for your legal issues.”

In addition to his legal practice, he has also acquired years of experience in the public service in Alberta; he once worked as a senior technical advisor for the Government of Alberta in areas of legislative and regulatory reviews, operational and strategic public policies, issues management and stakeholder consultation. 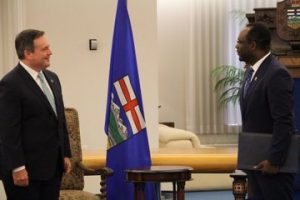 He was elected to the legislative assembly of Alberta in April 2019, and was later appointed minister of municipal affairs. In 2009, barely four years after arriving in Canada, he was part of a team that received the Premier’s Award of Excellence award (bronze medal category), a recognition preserved for “Alberta Public Service employees as well as select boards, commissions and agencies for superior client service and business-excellence practices.”

‘A ROLE MODEL TO THE BLACK COMMUNITY’

Dunia Nur, president of the African Canadian Civic Engagement Council, described Madu as a role model for the black community which “celebrates him.”

She also said Madu is fit for the new role, “not only because of his background as a lawyer but also because he is an active member of the African community.” 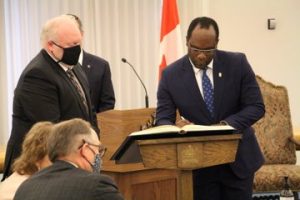 “Historically, these are positions that have been occupied by white men that have no understanding of the disproportional impact of the justice system and what Black communities experience,” she said.

“Whether we agree with one party or another that doesn’t really matter, especially for the Black voice right now.

“What matters is effective Black people that are educated, that have integrity, that also have education background, are the ones that are occupying the space.”

In one of his Facebook posts, Madu remembers the Igbo who were killed during the Biafran was that lasted from 1967 to 1970. In the post, in which he talked about the Black Ribbon Day – set aside to remember victims of totalitarian, communist, Nazi and fascist regimes – Madu also spoke about how starvation was used as a state policy during the war.

He wrote: “As a Nigerian born, I also remember with sadness and grieve the Nigeria-Biafra civil war that killed more than three (3) million Igbos, one million of whom were children who died through the state policy of starvation, including those from present day South-south of Nigeria.”

‘NO NEW TAXE BURDEN DURING THE PANDEMIC’

As if he has been following recent events in parts of Nigeria where the federal and state governments are pursuing an upward review of taxes, Madu recently campaigned against increasing taxes during the pandemic, citing “tough times” for people as a reason not to make such move.

“Businesses and citizens are going through tough economic times right now due to the pandemic and the global financial crisis. The last thing we need is increased taxes,” he said in an August 7 Facebook post.

“Folks and businesses are suffering – they need a break from higher taxes. Plus, the days of fiscal reckoning will soon be upon us as a consequence of the pandemic’s economic ruin and the extraordinary financial measures by the province to protect lives and livelihood.”

‘I AM BEYOND HUMBLED’

In a statement published via his Facebook page, Madu — who is expected to bring his legal training and policy experience to use in implementing key democratic reforms including a review of Alberta’s Police Act — said he was “beyond humbled” over his new role. 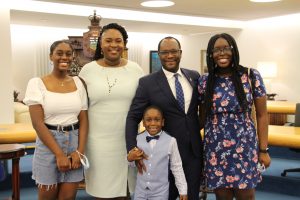 He said he is determined to make sure Alberta’s justice system represents all its citizens “in a way that is fair and accountable.”

“As I reflect upon my new appointment as the Minister of Justice and Solicitor General, the importance of carrying this ministry forward amid these difficult social and economic times weighs heavily on my mind,” he said.

“My fundamental belief that every soul deserves equal access to justice has always informed my legal work, and that will never change.

“I spent my entire professional career fighting for those who lacked means, including at Legal Aid Alberta, Labour, Immigration, and Human Rights Tribunals, and in the courts. My views on the application of justice and equality will always be integral to who I am as a father, husband, citizen, lawyer, and politician.”