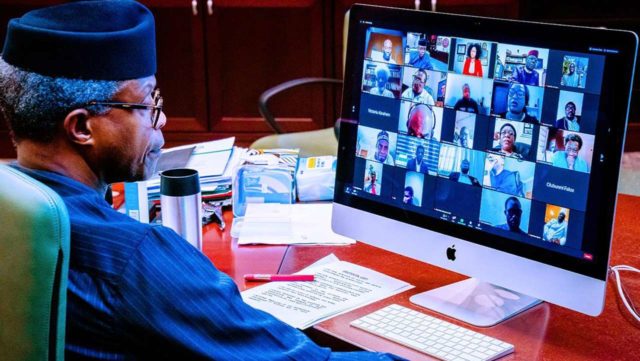 Experts in the legal and media profession led by Nigeria’s Vice President, Prof Yemi Osinbajo SAN last week gathered to deliberate on the prospects and challenges of journalists covering virtual court proceedings. They all agreed to the need for journalists to have free access to cover such proceedings in the interest of the public.

All the participants, including Prof Osinbajo harped on the need for journalists to have free access in the coverage of virtual court proceedings, saying that section 36 of the Nigerian constitution gives the media rights to cover public hearings, including the courts.

In his keynote address,  the Vice President viewed the webinar as an important conversation on the questions around reporting virtual court proceedings.

He said: “Reporting of court proceedings is a crucial exercise of the right to fair hearing, a cornerstone of which is that hearings must be held in public. How that right will be given full expression when court proceedings are within the encrypted confines of virtual platforms is really the subject of our conversion today;

The Attorneys General of Lagos and Ekiti States deserve our commendation for bringing the matter before the Supreme Court. They asked the court to determine whether having regard to the constitutional requirement that court proceedings, save for some exceptions, must be held in public and whether court hearings by the use of technology, by remote hearings of any kind, whether Zoom or WhatsApp, Microsoft Teams, Skype or any other audio-visual or video-conference platform are constitutional;

The Supreme Court while dismissing the suits themselves as premature and speculative nevertheless said that virtual proceedings were indeed Constitutional. This wise approach of the Court probably saved our system of justice another catastrophic round of technical decisions around the constitutionality of virtual proceeding;. It may also be cautiously taken as a signal that the Supreme Court expects the lower courts to go down this new path with as little attention to technicality as possible.

So, we are at a point where at least we know that virtual hearings are legal. This means that the Supreme Court is satisfied that appropriate means can be found to ensure that hearings are public, and that the press and indeed members of the public can access the proceedings”.

Prof Osinbajo said both the traditional media, and operators in social media now have the same constitutional protections and responsibilities in the coverage of news as the definition of freedom of expression covers all.

“I think we are at an interesting place because in the past it was always the traditional media that could be sanctioned for violations but now it seems that practically everyone on social media who chooses to publicize the proceedings of a court will be subject to the restrictions that the traditional media have always had”, he said.

The Vice President however stated that for virtual proceedings to work satisfactorily, the judiciary may need to do away with technicalities and concentrate more on substantive justice.

He said: “One of the questions I would want to ask is, what type of platform will really serve our purposes in court proceedings? I know that several people already use virtual platforms for arbitration but for purposes of trials, I am not so sure these sorts of platforms are the best. This is because we have to look at situations if we are examining witnesses, we are showing them documents;

So, there are issues that we need to resolve. We need to resolve several issues of procedure and evidence, so that we are better able to navigate these proceedings in a manner that not only serves the ends of justice but also in some obedience to the law. I think that an opportunity that this offers us is to get rid of this issue of technicality as much as possible.. It is really a breath of fresh air considering the ways that we tend to magnify the issue of technicality to the point where you wonder where justice is.

I am hoping that the opportunity we have in virtual proceedings will also be an opportunity to discard several of the unnecessary technical rules that we have in our adjectival laws, laws of procedure, evidence and all that”.

He said the court agreed that the media must be given access to documents tendered in court. “Our judicial system from the point of view of Supreme Court decisions absolutely abhors secrecy,” he stated. Olanipekun argued that the level of transparency of any virtual hearing would be enhanced if the recording of the proceeding is made available to the press.

It gives me great pleasure to welcome you to this webinar, Media Coverage of Virtual Court Proceedings, Prospects and Challenges.

Former NBA Scribe, Adesina advocated video recording of court proceedings and showing it live on dedicated channels for the public to watch. “We are all witnesses to the trial of the sportsman, O.J Simpson in the United States. Even in South Africa, court proceedings are televised live for every citizen to watch. This system will eliminate the issue of corruption in the justice system” he said.

In his own contribution, Falana recalled his experience in the African Commission and African Court on Human Rights in Banjul, The Gambia and Tanzania respectively where African lawyers file processes by email, make submissions by email while both institutions decide cases and send their decisions to parties by email.

“This July, I took part in virtual proceedings conducted by the ECOWAS Court in Abuja, specifically, in the case of a Justice of the Liberian Supreme Court Justice  whose impeachment is being challenged at the Court by my law firm. During the hearing, the Court sat in Abuja and listened to my  submissions which I made in Lagos, while the Attorney- General of Liberia addressed the Court in his own office in Monrovia and at the end of our submissions the Court adjourned the case for adjournment”.

Falana recalled President Muhammadu Buhari’s complaint about the slow pace of civil and criminal cases in Nigerian courts at the recently concluded NBA Conference. Instead of complaining, he urged the President to ensure that the judiciary is adequately funded to accelerate the hearing of cases while court orders are obeyed by the Government.

Prof Odinkalu aligned himself with Falana but added that virtual court proceedings can only work where round pegs are put in round holes. He said the judiciary must employ competent judicial officers for the system to work. He lamented a situation where appointment of judicial officers has almost become hegemonic. He said he stopped going to court to avoid corrupt judicial officers.

Akinnola, who doubles as the Chair, Center for Free Speech(CFS) mentioned several extant laws that allow journalists to cover court proceedings and also aligned himself with other speakers that supported free access to court proceedings.

The convener of the conference, the Publisher of Gavel International, Mr Mustapha Ogunsakin earlier in his introductory remarks said that the webinar was borne out of the need for journalists, particularly judicial reporters to carry out their constitutional responsibility of covering judicial proceedings in Nigerian courts seamlessly.

He said the need for virtual court proceedings has become inescapable as it is one of the majors ways to curb corruption in the judicial system.

“We urge the Nigerian judiciary, both at the State and Federal levels, to embrace virtual court proceedings, and encourage journalists to have free access to these proceedings. We must bear in mind that an open trial is the greatest asset of an incorruptible judge, just as it is the worst nightmare of a corrupt judge”, he said.

Ogunsakin further encouraged journalists that cover courts to insist on their rights to cover proceedings and challenge court officials that refuse them. “Gavel International henceforth will report courts compliance with such proceedings”, he concluded.