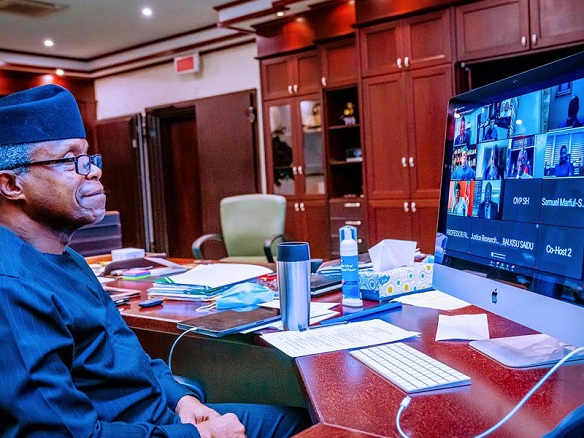 The Vice President, Prof Yemi Osinbajo yesterday observed that the justice administration “is under severe pressure from the elites who want to get ahead at all cost” while faulting the process of appointing judges in Nigeria.

With Osinbajo’s observation, the Chief Justice of Nigeria (CJN), Justice Ibrahim Tanko Muhammad made a case for new reforms in the judiciary, specifically with respect to the appointment of judges.

The leaders expressed grave concerns about the quality of judges and justice administration, at a webinar the Justice Research Institute (JRI) organised yesterday.

Among others, the webinar also featured the Speaker of the House of Representatives, Mr. Femi Gbajabiamila, the Chief Justice of Ghana, Justice Kwasi Anin-Yeboah and a Justice of the Supreme Court, Justice Amina Augie.

At the webinar, the leaders agreed that justice reforms had become necessary to restore the dignity of the judiciary and judges lost to the manipulation of politicians and various sectional interests in the country.

Specifically, Osinbajo lamented that the political elite always wanted “to be sure of all the outcomes and they wanted all the outcomes to favour them. That is the same pressure that we have with respect to the federal character.

“You cannot pick out the judiciary alone as the causes of failure. Nigerian elite, politicians want to own things. They want every decision to favour them. They influence how judges are appointed”, Osinbajo said.

He, therefore, suggested that the principle of federal character “is no longer necessarily seen as choosing the best from a particular zone or a particular state.

“It is the interest in that state or that zone who want to further their own purposes that would want to come together to ensure that the person who is appointed is not necessarily the best, but he is the one that is most suited to their own purposes. This is the problem that we have.

“I want to say that this is a natural human feeling. Most people in the world would rather have a situation where everything worked in their favour.

The vice-president said every nation makes up its mind at some point to create the best environment and circumstances it needs to succeed.

Osinbajo said that there should be honest conversation among the legal profession, the judiciary, the executive, the legislature and the elites nationwide on the necessity of appointing the best judicial officers.

He explained: “If we leave it to the system that is going on at the moment, we are clearly headed in the wrong direction because interest whether private, political or group influences how judges are appointed.

“We must agree to an objective process to rigorously examine, test and interview all of those who want to come forward as judges,” the vice president said.

He also said it was important to pay attention to the welfare of judges by providing adequate remuneration in order to shield them from corruption.

He, however, observed that the perceived lapses in the judiciary and entire democracy in the country should not be entirely blamed on judges.

In response to Osinbajo’s standpoint, the CJN observed he was willing to accept any proposal that would reform the judiciary for better performances.

He said: “This is something for the nation and not for individuals. If the law has conferred powers on an individual, it must be exercised. But, I’m 100% ready for reforms.”

According to Ghana’s chief justice, it can be directly from the bar or a form of promotion,” he said.

The Speaker of the House of Representatives, Mr Femi Gbajabiamila lamented that the principle of federal character no longer guaranteed appointment of quality judges, stating that appointment should be based on merit.

“We need to strike a balance between merit and ethnic balancing. Federal character must give way to merit”, he said.

But, a panelist and Justice of the Supreme Court, J Amina Augie, said the federal character should be retained in the appointment of judges to avoid a situation where they may come from one side of the country.

She said every part of the country “has competent persons. The federal character has come to stay. It is something we have to accept. But we have to evolve a system where we appoint the best; to sieve the wheat from the chaff.”

Augie, however, agreed that lobbying for judges appointments was rubbing off on the quality of judges, thus calling for the NJC to prepare a data on the rating of judges for subsequent appointments and elevation.

Augie, a justice of the Supreme Court, also decried the process of “lobbying in the appointment of judicial officers. There are people who are passionate who can do the job but they are side-tracked by that pressure of people who know people that have gotten there.”

She, therefore, recommended that justices should be elected or elevated not just based on the quantity of their output but on the quality of their work as well as their personal character.

Ihedioha vs Uzodinma: Lawyers Give 7 Reasons Supreme Court can Reverse...