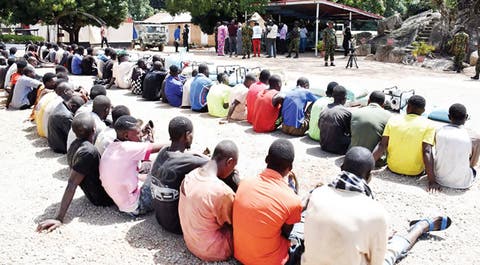 The Plateau State Government on Wednesday begun the prosecution of over 300 suspected looters and arsonists in the state.

They were accused of looting, criminal trespass and inciting public disturbance, among other charges.

The suspects, who had been in military and police detention after they were arrested in different parts of Jos and the Bukuru metropolis between Saturday and Sunday, were moved to the Bassa Local Government Area on Wednesday for arraignment.

The defendants were arraigned one after the other at Jebbu Bassa Area Court before several judges including Justices N S Dashe, Adar Roseline Baraje, and L B Longs as well as Lawal Sulaiman, among others.

In all the cases brought before the judges, the prosecutors from the state Ministry of Justice told the court that the accused persons committed the offences against the state and should be prosecuted according to the law.

The defence counsels, however, pleaded with the court to temper justice with mercy for the accused persons, particularly as they were first offenders.

The defence counsels also pleaded for short sentencing with an option of fine after their clients pleaded guilty to the offences.

After considering submissions from both parties, the judges in their separate judgments sentenced the accused persons to three months in prison with an option of N10,000 fine.

Many of the suspects were allowed to go home after perfecting their bail conditions.