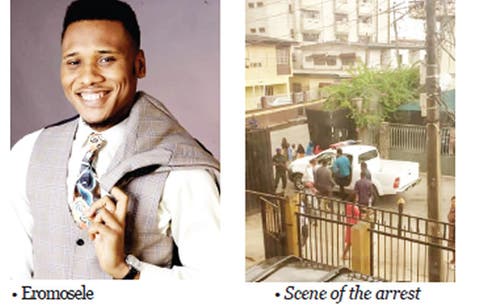 No fewer than 15 armed policemen arrested a promoter of the #EndSARS protest, Eromosele Adene, after invading his apartment on Adeleke Street, in the Allen area of Ikeja, Lagos State, on Saturday.

PUNCH Metro gathered that a protest had been slated to hold at the Allen Junction in Ikeja when the policemen besieged Eromosele’s house and whisked him away.

His sister, Florence, who spoke to PUNCH Metro on Sunday, said one of the policemen deceived her by claiming that he had a parcel to deliver to their father around 7am on Saturday.

“When I met them, they told me that they were actually looking for my brother and instructed me to take them to our house, but I refused. They said they did a business with him and sent money to his Zenith Bank’s account but the commodity was not delivered. I told them that I did not believe their story and insisted that they give me a valid explanation.

“I was dragging with them when three Hilux patrol vehicles with about 15 policemen armed with AK-47 rifles stormed where we stood. I became terrified and had to lead them to my house.

“My brother, who was inside the room, kept posting online that security agents were at his place to arrest him. The policemen became annoyed when they saw the posts and demanded that he pulled them down. So, we told him to pull the posts down and he did, but they still took him away to the office of the Commissioner of Police.

“He was there for about three hours but they didn’t do anything. We left with our lawyer and parents around 8pm. We became surprised when we heard that they had moved him to the State Criminal Investigation and Intelligence Department, Yaba, on Sunday. They later brought him back and put him inside a cell in Area F.”

One of the organisers of the protest, Juwon Sanyaolu, while condemning the arrest, said Eromosele was tracked.

He said, “The moment the fliers the Allen Junction protest started circulating, we started receiving different calls. On Friday, he informed me that he received a call from the Lagos Air Force Commander, who claimed to have discussed with the Commissioner of Police and that they both agreed not to attack the protest but give us maximum protection.

“But little did we know that that phone call was a ploy to actually track his location. Everyone who converged on Allen Junction for the protest was intimidated, so, we had to settle for an alternative venue, somewhere around the Gani Fawehimi library.

“We were protesting there and journalists were covering the protest when the police came and violently disrupted the protest. It is not the job of the police to subvert people’s right to protest. It shows how far the Buhari government is ready to go to ensure they turn us into a conquered people.”

The state Police Public Relations Officer, Muyiwa Adejobi, said he was going to get back to our correspondent, but had yet to do so as of the time this report was filed.

Justice Lilian Abai Sworn In as the Acting Chief Judge of...