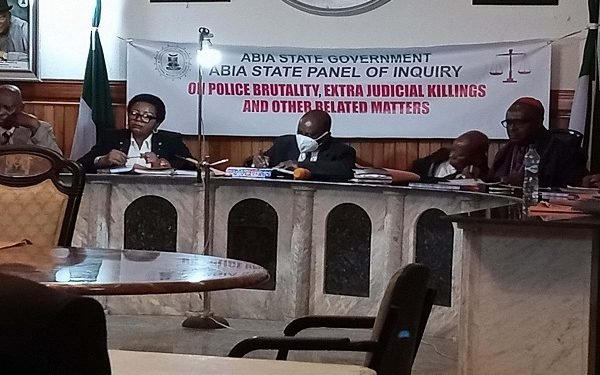 An auto mechanic identified as Emeka Obasi Kama has narrated to the Abia Panel on Police Brutality of how his friends, Uchechi Agwu Kalu and Ndubuisi got missing after their encounter with some police officers from the Anti-Kidnapping Squad in Aba.

Speaking at the sitting of the panel led by retired Justice Sunday Imo, Emeka alleged that police officers identified as Edet and Yellow serving at Azuka police station, Ogbor Hill, Aba, at the time of the incident, were responsible for the disappearance of his friends on August 11, 2020.

According to Emeka, he went to Uchechi’s house on the said date and saw two people namely Ifunanya and Ndubuisi and joined them inside the house.

He said after a while, some policemen came inside the house and started beating them without any reason.

“As we were being beaten, Uchechi shouted Edet, I didn’t do anything to you but healed you of a deadly skin disease; “atuere.”

“As Uchechi was shouting, they took me, Ifunanya and Ndubuisi outside, but Uchechi, Edet and two other officers were left in the room.”

Narrating further, Emeka said, “I don’t know what Ndubuisi did, he was shot as we were lying down outside.”

Emeka told the panel that the policemen carried Ndubusi into their mini-bus and sped off.

He said the policemen returned later and took Uchechi away.

“As they were taking Uchechi away, one of the policemen poured fuel on the house and set it ablaze.”

Emeka narrated that since then, the two men had not been seen.