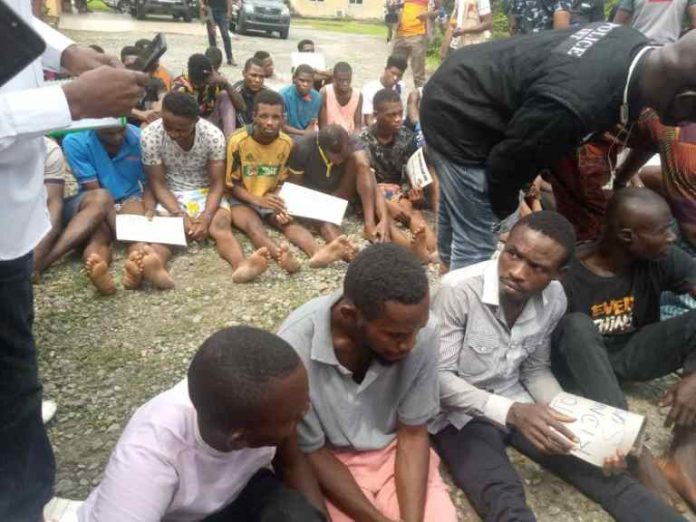 The Cross River State Police Command on Thursday paraded 6 kidnap suspects of the wife Justice Ignatius Agube of the Court of Appeal and 28 others for Cultism, piracy and sundry crimes.

Briefing newsmen shortly after parading the suspects, the Commissioner of Police, Abdulkadir Jimoh disclosed that sequel to the kidnapping of Mrs Ekwele Agube, wife of the Court of Appeal Justice and the killing of her aide, Mrs Glory Akpama and her subsequent release after 15days they launched a manhunt and arrested 6 of them.

Jimoh said: “The Intelligence Response Team (IRT) Operatives attached to FIB deployed to the state to assist the Commissioner arrested six notorious kidnappers, recovered locally made pistols and they have confessed to the crime.

“I want to reiterate and unequivocally state that the Command has strategized and mapped out an onslaught on Cultism, armed robbery, kidnapping and other social vices across the state and will never renege on this no matter whose ox is gored.

“within few weeks of my assumption of office, we have arrested 6 for kidnapping suspects,3 sea pirates,10 for armed robbery suspects, 6 others for Cultism and 9  for murder and rape, he said.

Speaking further the Commissioner noted that most of the suspects were also involved in Cultism adding that the Command was poised to clamping down on all criminal elements and lawbreakers at all levels.

He, however, appealed to traditional rulers, religious leaders CLOs and the political class to support the police to fight this Hydra-headed monster that tends to shatter the peace of the state.

Vanguard gathered that Nse Bassey,30 a.ka. the Lion and gang leader of a notorious kidnap syndicate, Bassey Effiong a.k.a Dragon, Christopher Effaeyo a Bolt driver, Etim Effiong, Louis Bassey and Edet Ebe were the Six-man gang that allegedly killed Mrs Glory Akpama and kidnapped the wife of Justice Agube who was released after 15 days.

Christopher Effaeyo who drives Bolt taxi told Vanguard that he was paid 100,000 naira for the deal adding that it was not his first time in such a deal.

“I was only a driver in the business, I drive bolt in Calabar, but I drove the woman to their hideout, I did not kill anybody and I was paid 100 thousand naira for driving her to the creek,” he said. One of the suspects, Okon Asuquo aka.

Akon who was also arrested, a warlord/ cultist who specializes in cannibalism and butchering of body parts of victims captured in the wars confessed to being a member of Klans confraternity and equally admitted committing heinous crimes and will be charged to Court soon.