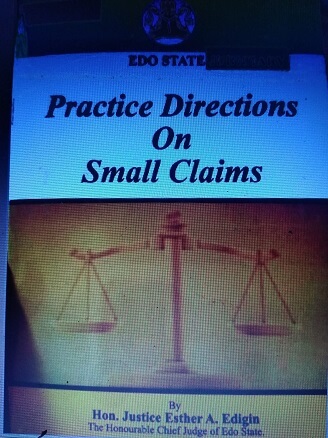 The new Practice Direction on Small Claims Court was signed on the 28th day of February, 2020 by Hon Justice Esther Amenaghawon Edigin (Chief Judge of the High Court of Edo State) and the Practice Direction came into force on the 2nd day of March, 2020.

The Practice Direction is a significant step towards further enhancement of the process for settlement of commercial disputes involving small claims not exceeding Five Million Naira (N5,000,000) in Edo State. The Practice Directions will however enlarge the frontiers of easy access to an informal, inexpensive and speedy resolution of simple debt recovery disputes in the Magistrates’ Courts.

It is worthy of note that a Small Claims Court is a specialized court or local tribunal created by statute with specific duties and powers. Generally, the court is designed to provide judicial determination of disputes involving small amounts of money quickly and cheaply[1].

The main objective of the new Practice Direction of Edo State Small Claims Court is aptly captured in Article 1 of the said Direction as follows:

The objective of the small claims procedure is to provide easy access to an informal, inexpensive and speedy resolution of simple debt recovery disputes in the Magistrates’ Courts.

From the above objective, it is worth mentioning that the new Practice Direction will facilitate the just and expeditious resolution of civil matters, and will secure simplicity in procedure, fairness in administration, efficient and speedy dispensation of justice.

A critical look at the above reveals that the claim must be for a liquidated monetary demand not exceeding N5,000,000 (Five Million Naira). It is therefore worthy of note that both practitioners and litigants who intend to appear in the small claim court should have a firm understanding of what liquidated money demand entails even though it is not defined in the Practice Direction[3]. This will assist parties ascertain whether their claim will likely be sustained under the new practice Direction.  The Supreme Court in EKO ODUME V. UME NNACHI[4], Per Idigbe JSC explained the meaning of liquidated money demand thus:

While Iguh JSC in MAJA V. SAMOURIS[5] explained the concept further as follows:

It is therefore incumbent on the claimant in his claim under the Edo State Small Claims Court Practice Direction to explain in details what he is claiming particularly in a case where the claim includes debt and interest. In other words they should not be lumped together in order to satisfy the requirement of Artice 2 of the Practice Direction of the Edo State Small Claims Court.

The Summons is then served by Bailiff of the Small Claims Court within seven (7) days of filing. Upon service, the Bailiff or any such designated officer of the Small Claims Court shall file an Affidavit of service within 2 days of service or file an Affidavit of Non-Service if unable to serve the Summons on the Defendant within the time specified. The Claimant in such a position shall apply for an Order of substituted service of the Summons on the Defendant[8].

The Edo Practice Direction provides that “parties may represent themselves at the proceedings in the Small Claims Court. Partnerships and Registered Companies can be represented by a Partner, Company Secretary or any other Principal Officer of the Partnership or Company”[9].

From the above, it shows that proceedings may be conducted without the input of legal practitioners at the court hearing. With that, an interpretation conundrum is created under the Article 10 of the practice Direction especially against the background that the word ‘may’  when used in a statute or document gives the interpreting judge the latitude to define whether it is ‘mandatory’ or ‘optional’.  In Mokelu v. Federal Commissioner for Works and Housing[10] PER MADARIKAN, J.S.C. at P. 9, paras. F-G explained what ‘May’ denotes as follows:

“May” is an enabling or permissive word. In that sense, it imposes or gives a discretionary or enabling power. But where the object of the power is to effectuate a legal right, “may” has been construed as compulsory or as imposing an obligatory duty.”

The word “may” is a word of discretion and gives permission to act or not to act.  However, in certain cases, the courts had construed the word “may” as word of command and obligation.  This is based on the philosophy that justice should not be a slave of grammar.  An instance of this is where legislation imposes an obligation or a duty on a public official which benefits is to accrue to private citizens.  In the case of UDE V. NWARA[11], the Supreme Court construed the word “may” in Section 28 of the States Land Law of River State as the word “shall” or “must”, thus imposing an obligation on the State.  NNAEMEKA-AGU, JSC delivering the lead judgment of the court said:

“May” should be construed as mandatory, that is, meaning, “shall” or “must”.  I believe that it is now the invariable practice of courts to interpret “may” as mandatory whenever it is used to impose a duty…”.

If the intention of the draftsmen of this Practice Direction is to apply the above interpretation of ‘may’ as used by the Supreme Court and which denote ‘shall’, then with due respect to the draftsmen of the direction, a constitutional question  is likely to be raised time to come[12]. On the other hand if their intention is for parties to have the option of representing themselves in person or with the aid of legal practitioners, the practice direction should have expressly included lawyers in the list of representatives at the court hearing under the said Article 10. It is humbly suggested that the Article 10 should be amended to expressly include legal practitioners for constitutional reasons and because of the sensitive or technical issues involve in court claims. This argument is further strengthened on the basis that ‘one may determine how a matter commences but cannot tell the end of such matter’. I am of the firm view that when laymen are allowed to conduct their proceedings in accordance with the objective of this practice direction, they may risk suffering losses as the matter progresses even till the last appellate. If this objective is really geared towards assisting litigants who may not have resources to take lawyers, then orientation, enlightenment or sensitization should have first be organize for litigants in Edo State  particularly those who have little or no education  and lives in the rural community.

Under the Practice Direction, judgment is to be delivered fourteen (14) days of the completion of hearing.[13]The entire period of proceedings from filing till judgment shall not exceed sixty (60) days.[14] However, the judgment of the Court is not invalidated by reason of the entire proceedings of the court having exceeded sixty (60) days.[15] The Defaulting party is mandated to comply with the judgment with fourteen (14) days of delivery of such judgment.

Pursuant to Article 14 of the Practice Direction, ESSCC, appeals from the Small Claims Court shall lie to the Fast Track Division of the High Court; the whole Appellate Process from the assignment of the Appeal to Judgment shall not exceed thirty (30) days.

ALSO READ   Analogue Regulation in a Digital Age: My Thesis Against the Daily Use of The Wig and Gown in Nigerian Courts - Reginald Aziza

Whilst the Small Claims Court has its pros and cons, it has indeed worked in many jurisdictions of the world over and there is no doubt that with hard work, commitment and determination, it will equally work successfully in Edo State.

The illiterate litigants may find it extremely difficult to properly gather and file their documentary evidence as well as present their oral submission before the Court. This can put an unrepresented Claimant at a disadvantage position especially when the matter proceeds on appeal. The adequate and periodic training in the practice and procedure of the Small Claims Court for Magistrates, Registrars, Clerks, Sheriffs and other relevant judiciary staff, would be critical to the successful working of small claims commercial disputes resolution in Edo State.

Finally, it is my submission that the introduction of the Small Claims Court, disputes involving relatively small amounts of money will be expeditiously dealt with, rather than be left to linger in the Court’s docket for inordinate lengths of time.  Limiting the period of proceedings to 60 days will accelerate the pace of justice in our legal system. It is a great improvement in our jurisprudence. Though there cannot be a law without some lacunas, the effort of the Edo State judiciary is commendable in the enactment of the 2020 Small Claims Court Practice Direction. All stakeholders (particularly the Magistrates and lawyers) must brace up to shun every attempt to use the 2020 Practice Direction as a tool to delay the adjudication process based on technicalities. Instead, there must be a desire to uphold the spirit and intent of the overriding objective of the 2020 Practice Direction.

Osarenoma Davidson EDIEYA, Esq, LL.B, B.L is an LLM researcher at the Faculty of Law, AAU,Ekpoma and also a Barrister and Solicitor of the Supreme Court of Nigeria practicing at the law firm of P.K Omoike & Co in Benin City. He can be contacted at edieyadavidson@gmail.com and 08055241970

[3] Underlining is mine for emphasis

Reduction in the Number of Justices of the Supreme Court –...

NBA Lacks the Power to Set Up an Online Portal for...