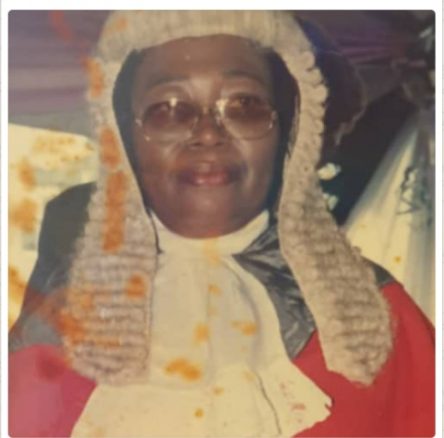 Justice Dolapo Funlola Akinsanya, the judge who on November 10, 1993, declared as illegal, the Interim National Government (ING) of Chief Ernest Shonekan is dead.

Justice Akinsanya according to family sources died in Lagos on Thursday November 5 in Lagos. She was aged 79.

Born on February 24, 1941 to the Prof Sanya Onabamiro family, the late jurist attended Agbeni Methodist Primary School, Ibadan1948-1954. She proceeded to St Anne’s School Ibadan, for her Secondary School Education 1955-1959. She then proceeded to Victoria University of Manchester for her law degree 1962-1965. She attended the Nigerian Law School, Victoria Island, Lagos and was called to bar 1965-1966.

A year later, she got married to reknown surgeon, Prof Bolaji Akinsanya on March 25, 1967. They were blessed with six children.

She was in private legal practice between 1966 and 1976 before she joined the Lagos State Ministry of Justice as a Senior Legal Officer. She rose through the ranks as Assistant Director Civil Litigation, Secretary/Legal Adviser, LSDPC, and Director, Civil Litigation. She was appointed a judge of the High Court of Lagos State on October 31, 1989.

As a judge, the late Justice Akinsanya was fearless, amiable, and very decent. She will be remembered for her role in stabilizing the Nigerian nation in the heady days of the Military when Military President, Gen Ibrahim Babangida annulled the June 12, 1993 elections believed to have been won by the late business mogul, MKO Abiola. Gen Babangida hurriedly left government on August 26, 1993 and handed over to an Interim National Government headed by Chief Ernest Shonekan, a former Managing Director of UAC Plc.

Chief Abiola challenged the hand over and the case came before Justice Dolapo Akinsanya. In her judgment on November 10, 1993, she said: “President Babangida has no legitimate power to sign a decree after August 26, 1993, after his exit, so the decree is void and of no effect,”. With the judgment, the legality of the ING was determined. The late Gen Sanni Abacha took over government through a coup some months later.

Judge Dolapo Akinsanya issued the ruling in a case brought by thwarted presidential contender Moshood Abiola. She told a packed courtroom that Nigeria’s military ruler, Gen. Ibrahim Babangida, who stepped down Aug. 26, had no authority to install an interim government.

“It takes us one step closer to the establishment of government based on the consent of the people,” Abiola said in a statement. “This is a significant victory for the people of Nigeria.”

Abiola was not in court, but thousands of his supporters cheered the verdict. Many people poured onto the streets of Lagos calling for Abiola’s installation in the presidency, which he is widely believed to have won in a June 12 election annulled by Babangida for alleged vote-rigging.

“President Babangida has no legitimate power to sign a decree after August 26, 1993, after his exit, so the decree is void and of no effect,” Akinsanya declared. She ordered that a civilian constitution, which was drawn up under Babangida in 1989 but never implemented, go into effect”.

Justice Akinsanya retired from the Lagos Judiciary on February 21, 2006. The then governor, Bola Ahmed Tinubu described retiring Justice Dolapo Akinsanya as “one of the heroines of the present democracy in Nigeria for the courageous judgement she delivered against the legality of the Interim National Government in November 1993”.

Elegy from the Bar (For Mrs. Christy Elema)