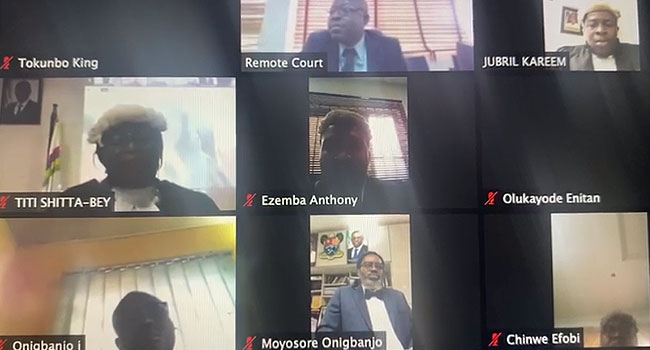 The Nigerian Senate on Tuesday passed for first reading a constitution-alteration bill seeking for the legalisation of virtual court proceedings.

The provisions of the Bill as contained in the draft copy include Section 36 sub-section (3) which states thus:

“This section is hereby amended by the addition of the following: “Provided that nothing in this subsection shall invalidate proceedings of a court or the proceedings of a tribunal relating to matters mentioned in subsection (1) of this section (including the announcement of the decisions of the court or tribunal) where same is held by remote hearing or any virtual means now in existence or yet to be developed.

“Section 36 subsection (4) is hereby amended by addition of sub-paragraph (c) as follows: (c) nothing in the foregoing paragraphs shall invalidate proceedings of a court or the proceedings of a tribunal relating to matters mentioned in subsection (1) of this section (including the announcement of the decisions of the court or tribunal) where same is held by remote hearing or any virtual means now in existence or yet to be developed.

“Section 36 subsection (12) is hereby amended by addition of the following subsection (13): In this section, “remote hearing” means proceedings or hearing of court conducted via zoom, skype, WhatsApp video or any other social media platform or technological innovation.”

The proponent of the Bill explains further that section 36 (3) is sufficiently controversial enough now in terms of requirement of public hearing and determination of disputes.

This, according to him, endangers the results of proceedings eventually held virtually. Except the amendment is done urgently, the whole judicial functions of the country will remain paralysed, he argued.

According to him, the Bill needs to be given expeditious consideration and passage.

“It is s a case of emergency now. Upon 2nd reading, the States can be given three days to make returns so that before the end of the month, the process is completed.

“The National Judicial Council in the wake of COVID-19 pandemic and the inability of courts to hold courtroom proceedings had taken steps to ensure continued administration of justice through virtual proceedings in accordance with global best practices, with some State Chief Judges coming out to openly adopt and implement the NJC guidelines.

“However, Nigerian lawyers have been divided over this issue as there has been an ongoing debate among legal practitioners as to whether or not virtual hearing is real hearing as provided for in the Constitution while some are insisting that the word “public” in the Constitution shall continue to mean physical courtroom or other designated place unless and until the relevant provisions in section 36 of the Constitution are amended,” he said.

Bamidele, who is a member of the Body of Benchers, said in the meantime, the NJC has a responsibility to work with stakeholders to manage the current situation until the Constitution is rewritten “as neither the practice direction, rules of court, nor an Act of the National Assembly can change the legal position so that we do not bury our heads in the sand yet again until the sand is blown off by the storm of section 1, subsection 3 (inconsistency clause) of the Constitution if and when it is ignited.”

He appealed for the understanding of journalists as he insisted the details and general principles of the Bill, which just passed first reading, must first be debated on the floor of the Senate when it comes up for second reading during the next legislative day before it can become a matter for analysis in the media.

According to him, once copies of the Bill are distributed among senators to enable them to study the details before the next adjourned date, other senators would be able to make further inputs if any, while the Bill would be subjected to public scrutiny through a public hearing for stakeholders both from the bar and the bench to actively participate in fine-tuning it as a very important piece of legislation.