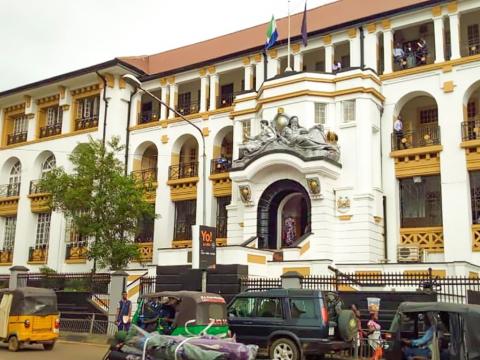 On a day when we all think there is a new dawn and we are celebrating the repeal of the libel law as a progressive nation then comes this sad news of how the old guards still want to muzzle free expression.

The Supreme Court presided over by Justice Halloway, in what many perceive to be an unusual move, today ordered the arrest of Human Right and democracy activist, Lawyer Augustine Sorie-Sengbe Marrah and suspension of his right to practice.

This is as a result of what Marrah posted on social media that the Supreme Court ruling on the qualification of lawyers to hold certain offices has some political undertones and is dangerous for the legal profession. 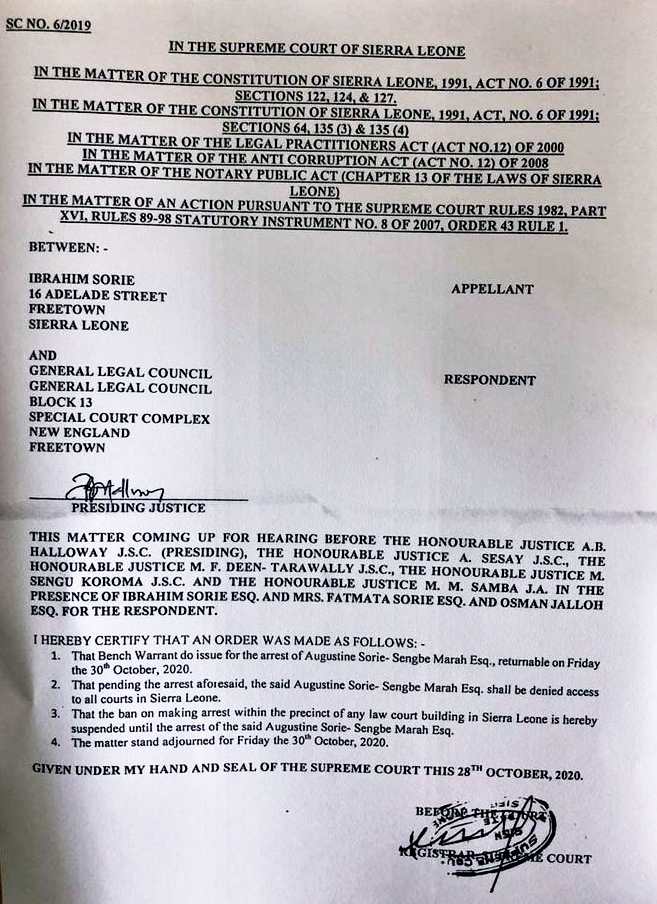 Sierra Leone Judicial independence and its lack thereof. Legal opinions no longer matter in this Paopa judicial system.
Few days ago, my good friend and a Renaissance Leader Augustine Sorie Sengbe Marrah wrote a legal opinion wherein he disagreed with the Supreme Court of Sierra Leone in what they as legal scholars would call years of calling in the legal profession. In his piece he disagreed with the ruling of the justices. Please see attached

“Yesterday’s judgment is certainly landmark—but only posterity will judge whether it is for good or otherwise.
When I took up this matter I was very aware that my position and interpretation of the law was adverse to me. I finished Law School in 2009 but didn’t sign the Permanent Register until 2012. If it were for personal interest, I’d simply zip it up since the interpretation which I was opposed to and which has been endorsed by the highest court of the land favours me as a matter of fact.
But as it has always been for me, the law is superior to my interest and even those of my relatives and friends. The judgment may have clarified the issue for some colleagues and benchers but to my mind, it has further obfuscated the legal profession and flattened its nobility. It has rendered the cornerstone of our profession—PUPILLAGE—terribly uncertain and I dare say, worthless. No doubt, one who aspires for public office or judicial duty does not have to bother again with the training and discipline of PUPILLAGE. One can now leave the Law School, scurries to the Caribbean for another ten years and returns only to be appointed a High Court judge. Such is the effect of the judgment. The imperative of pupillage has always been that the practical training aspects of legal practice, whether in government or private, ought to be added to those called to the Bar to be ultimately sealed as a Legal Practitioner.
In my opinion, POLITICS has yet again been elevated above the LAW in yesterday’s judgment by the Supreme Court. This is egregious chipping of the sanctity of the law and this is not a sour loser’s doomsday alarm. We raised this same eyebrow when the VP’s illegal sacking was judicially laundered—less than half a decade later, chickens from are coming home in droves to roost . Only those allied with politics and self-serving interests will be jubilating, those of us on the side of the law, will weep for posterity. Weep we will but dither, we will not.
_Aluta Continua_
*Augustine Sorie-Sengbe Marrah Esq.*’’

The hypocrisy here is that when this very Supreme Court ruled on the Samsumana vs Government of Sierra Leone case, so many legal opinions and criticisms were made then of which Augustine was a champion including so many Paopa lawyers, including my brother the current ACC commissioner.

ironically, not a single bench warrant was handed down to anyone of them under the APC government. Here we are, today, folks are being harassed, bullied and cowed into submission under this new Chief Justice.

This truly unfortunate and an affront to free speech. The only reason why they’re going after this young man under this government it’s because he’d refused to go to bed with them. Terrible system of governance, God save Sierra Leone.