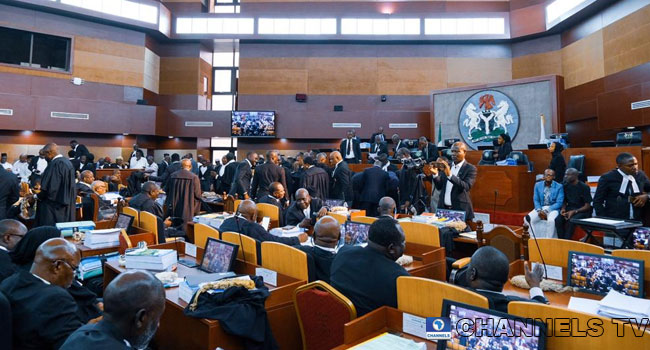 The Supreme Court has continued the hearing of the governorship appeals from six states of the Federation.

Proceedings resumed at the apex court in Abuja, the Federal Capital Territory one day after the court adjourned until Tuesday.

The court is hearing the appeals filed by some governorship candidates in Sokoto, Imo, Kano, Benue, Bauchi, and Plateau States, 10 months after the elections held in the states.

On Monday, the Chief Justice of Nigeria, Justice Tanko Muhammad, presided over a seven-man panel of justices hearing the appeals.

The proceedings, however, suffered a setback as a result of the crowd and the noise level in the courtroom, forcing the CJN to suspend the sitting.

He ordered counsels representing the parties not to appear with more than five lawyers but granted the parties in the case to witness the proceedings.

Thereafter, politicians who were not parties in any of the appeals were asked to leave the courtroom as the police deployed a dog to assist in the decongestion process.

Shortly after the court resumed sitting, Justice Muhammad announced that one of the presiding justices was sick and adjourned until Tuesday.

At the resumed sitting, Justice Muhammad led a reconstituted seven-man panel of justices of the Supreme Court.

The first case heard by the court was the appeal filed by the candidate of the Peoples Democratic Party (PDP) in Kano State, Mr Abba Yusuf.

Listed as respondents are Governor Ganduje and his party, the All Progressives Congress (APC), as well as INEC.