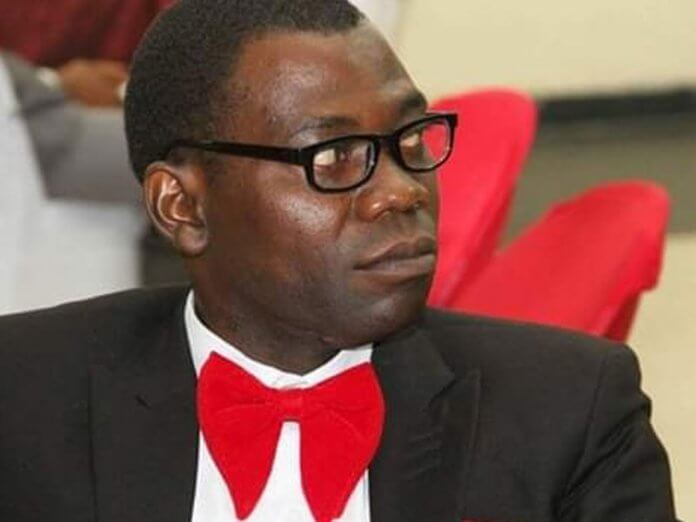 He died on Monday at the Lagos Island General Hospital, Lagos, where he was rushed to after a truck hit the commercial motorcycle that was taking him home after the close of work.

Akintunde had finished production for the Tuesday Law pages on Monday night and had set off for home but never made it to return to his son and pregnant wife.

He boarded a commercial motorcycle in Apapa, but on the way, he was hit by the truck driver who was trying to reverse without checking if the road behind him was free.

According to eyewitnesses, the commercial motorcyclist was trying to manoeuvre between stationary trucks when one of the hitherto stationary truck drivers moved out of its lane to another.

While reversing, the truck driver hit the motorcycle and crushed both the rider and passenger.

Akintunde was first taken to the Apapa Health Centre but they suggested that he be taken to the general hospital given the gravity of his injuries.

Speaking on Akintunde’s final moments, Mr. Henry Ojeluh, a colleague and friend, said although the deceased was in pain, he was still lucid when he was taken to the hospital.

He was put on oxygen but the hospital and the neighbouring hospitals did not have his blood group.

Ojeluh said for hours he drove round to get the blood to no avail until he finally got one from a hospital in Aguda, Surulere but Akintunde had died by the time he returned to the general hospital.

Thisday Managing Editor, Joseph Ushigiale, who was mandated to commiserate with the wife and family members and liaise with them on the burial plans, said the driver had been arrested and the truck impounded.

He said: “Some policemen that were at the scene of the accident apprehended the driver and impounded the truck. Akintunde was rushed to our corporate headquarters by the police team and some money was released for his treatment.

“A few hours later, the doctors pronounced him dead. I was mandated to liaise with the wife and family members to commiserate with them on his passing and also ascertain the burial plans.

“This morning, we broke the news to the pregnant wife. Afterward, some members of his family, church, colleagues and I converged on the mortuary to chart a way forward. May his soul rest in peace.”

While extending his condolences to the bereaved family, the Chairman & Editor-in-Chief, Thisday Media Group / ARISE News Channel, Nduka Obaigbena, pledged to bear the cost of the education of the children of the deceased.

He said: “Very very sad. Needless. May his soul find peace. Perfect peace. Thisday will meet all financial costs of his burial, his continuing salary and the cost of the full education of his children. May God bless and keep his family.”

In tributes sent in by colleagues and friends, the deceased was described as an easygoing, dedicated and resilient journalist who was passionate about his job.

“Akin was a pleasant and conscientious guy. God rest his soul and comfort his family,” he added.

On her part, the Managing Director of ARISE News Channel, the broadcast arm of TThisday, Ms. Ijeoma Nwogwugwu, described his death as tragic.

“What a big loss! May his blessed soul rest in eternal peace,” she said.

In a personal tribute to the deceased on his Facebook page, Mr. Raheem Akingbolu of Thisday Business Desk wrote: “ Goodnight Akin! you were a great guy. I was again forced to ask this morning why good people die too soon. On April 30, my colleague marked his wedding anniversary on Facebook, everybody celebrated with him.

“I’m personally touched because Akin was exceptional in behaviour, job ethic and disposition to work. To me, this is a personal loss. Rest in peace brother.”

Writing from her personal experience on the Law Desk with the deceased, Yinka Olatubosun said: “ It’s sad. I was on the same team with Mr. Akin for four years and he was very humble and hardworking.

“I’m finding it extremely difficult to write and do anything because I know he deserves better than this untimely death. May God console us and most especially the young family he has left behind.”

Also, Thisday Aviation Correspondent, Chinedu Eze, said: “He was calm, mature and very dedicated to his work. He was quietly admired by all because of his devotion to duty.”

The Nation’s Deputy News Editor and former Judiciary Correspondent, Joseph Jibueze, described the deceased as a dependable ally and a trustworthy journalist.

He said: “I am deeply saddened by Akin’s passing. He was a good friend and a dependable ally. A few weeks ago, we covered the Egbe Amofin Ni Eko annual lecture together and rode in the same car back.

“I called his number on Monday over a story we were to work on only to hear that he was involved in an accident that proved fatal. My heart goes out to his wife, family, Thisday staff and all those who know him.”

Reacting to Akintunde’s demise, the Executive Director of Access to Justice, Mr. Joseph Otteh, said he was devastated with the sad news.

While condoling with Thisday over what he described as “horrendous loss”, Otteh prayed God to give the organisation and his family the fortitude to bear loss.

“I’ve just recovered my breath after hearing of the passing of Akin. I can imagine how devastating the news is for you all and the entire organisation, not talking of his young family. I am deeply grieved by the news.

“Please accept my condolences, those of my family and of Access to Justice. May God give you all the fortitude to bear this horrendous loss,” he said.