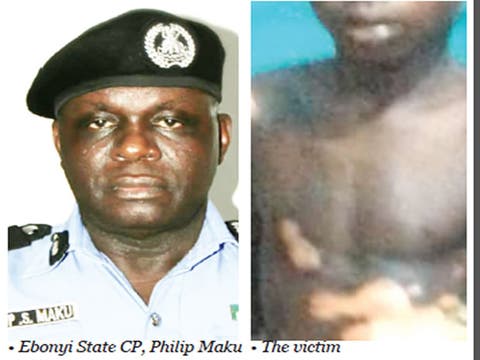 A 10-year-old boy, Ifeanyi, was on Saturday thrown into a fire for allegedly stealing a small measure of uncooked rice in a market at Inikiri Benard village, Effium community, in the Ohaukwu Local Government Area of Ebonyi State.

PUNCH Metro gathered that the lad’s mother was late, while his father was mentally-challenged.

A community source said, “The boy was thrown into a fire by two traders who accused him of stealing rice from a shop at the market to cook for himself and his father.”

He said, “HURIDE got a call from one Mr George Etamesor, on the grave abuse of this poor boy. This was because he was caught trying to steal some rice in their village market. They tied him up, threw him into the fire in a refuse dump in the market and allowed him to roast like a goat.

“The perpetrators are from the village. After committing this evil and seeing the critical condition of their victim, they still abandoned him to groan to death.

“It took the intervention of sympathisers to rush him to AMURT Hospital in Effium. But due to the severe nature of the injuries, boy was denied treatment. Efforts were thereafter made to take him to the Alex Ekwueme Federal Teaching Hospital, Abakaliki, where he is currently struggling between life and death.”

Nweke added, “When we inquired from the perpetrators why they went that far in maltreating the boy, they said he had the habit of stealing cassava, yam and others. So this time, they caught him stealing their rice and they decided to teach him a lesson so that he would not come back to steal their food again.

“They said it was not their intention to burn his whole body. They said they only tied him up and after beating him, they tried to roast his toes in the fire, but because he was struggling, he slipped off their hands and fell into the fire and got burnt beyond their expectation. We have reported the incident to the police.”

The state Police Public Relations Officer in the state, Mrs Loveth Odah, said though she was aware of the incident, the police had yet to receive an official complaint on the matter.

She said, “I heard about the ugly incident as a person; it is painful. But the command has not been officially communicated.

“We wanted to arrest those who did this evil thing to the small boy, but the attitude of the human rights group which drew my attention to the incident, is not encouraging. The HURIDE people told us that we should not arrest them for now because they want them (the perpetrators) to first take care of the boy’s medical bills in the hospital. I don’t know why they keep doing this.”